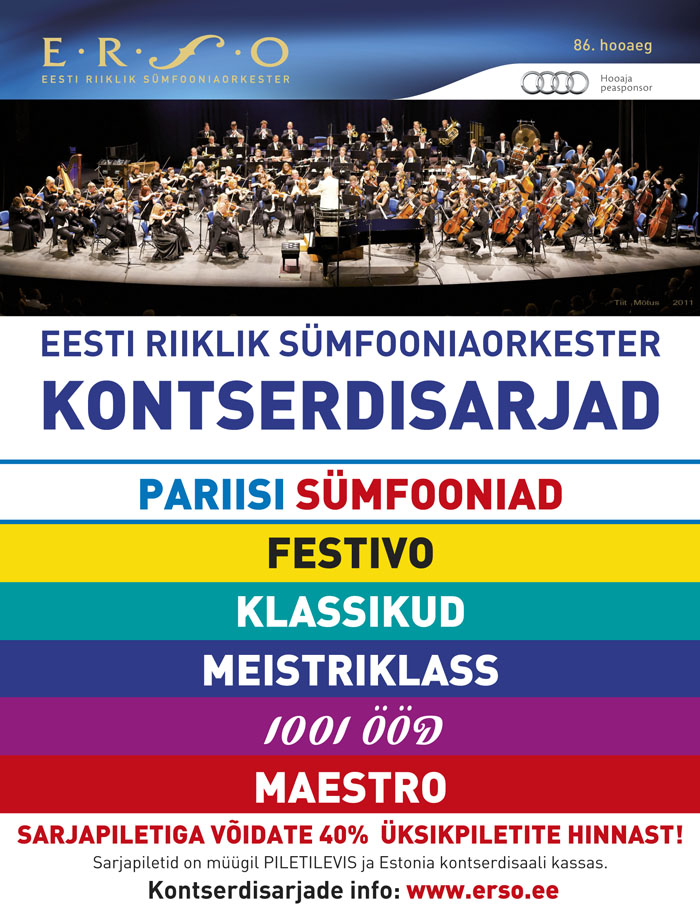 Six concerts of the PARIS SYMPHONIES series – sold out
This series of six concerts introduce you to some of the best of Haydn’s symphonic works – the Paris Symphonies – conducted by Neeme Järvi, the principal conductor of the ERSO. The Paris Symphonies will then be followed by Beethoven’s Symphony No 5, Dvořák’s Symphony No. 9 (New World Symphony) and Berlioz’s Symphonie Fantastique. The soloists include Stefan Dohr, principal horn for the Berlin Philharmonic Orchestra, Guy Spielman, principal clarinet for ERSO, Mihkel Peäske, principal flute for ERSO, Sharon Bezaly, flautist and outstanding soloist with a remarkable career, bassoonist Martin Kuuskmann and violinist Sergey Girshenko.

Five concerts of the FESTIVO series – sold out

These concerts bring to the stage Neeme Järvi as well as Eri Klas and the former principal conductor of the Estonian National Symphony Orchestra, Nikolai Aleksejev. The 200th anniversary of Verdi and Wagner will be celebrated with a dazzling opera gala followed by Shostakovich’s famous Symphony No 5 and Lemba’s Piano Concerto No 1 (Mihkel Poll, soloist). The series will subsequently be performed in the Grand Hall of the St Petersburg Philharmonia.

Five concerts of the CLASSICS series – sold out

A series of concerts featuring the greatest classical works by Haydn, Mozart and Beethoven, as well as Schubert, Bruckner and Richard Strauss. The only contemporary piece played will be The Five Sacred Trees by American John Williams, soloist Peeter Sarapuu, principal bassoon for ERSO.

Four concerts of the MASTERCLASS series – sold out

Four concerts of the 1001 NIGHTS series

This concert series is full of fairy tales and mysteries as one of its key pieces is Rimsky-Korsakov’s popular suite, Scheherazade, named after the famous Persian queen of the One Thousand and One Nights. In addition, we will be offering you Christmas music, a concert version of Humperdinck’s opera Hansel and Gretel boasting a number of children’s songs – and finally, also Messiaen’s Turangalîla-Symphonie dedicated to love.

Four concerts of the MAESTRO series

Neeme Järvi, Eri Klas and Nikolai Aleksejev join forces in this Maestro concert series. The key works performed will be Tishchenko’s Dante Symphony No 3 (Inferno) conducted by Nikolai Aleksejev and Wagner’s Parsifal (arranged by Henk de Vlieger); some wonderful Estonian music and the Requiem in D minor by Fauré will also be performed.

THE SERIES TICKET SAVES YOU 40% ON THE PRICE OF A SINGLE TICKET!
Series tickets can be purchased through PILETILEVI or at the box office at Estonia Concert Hall.