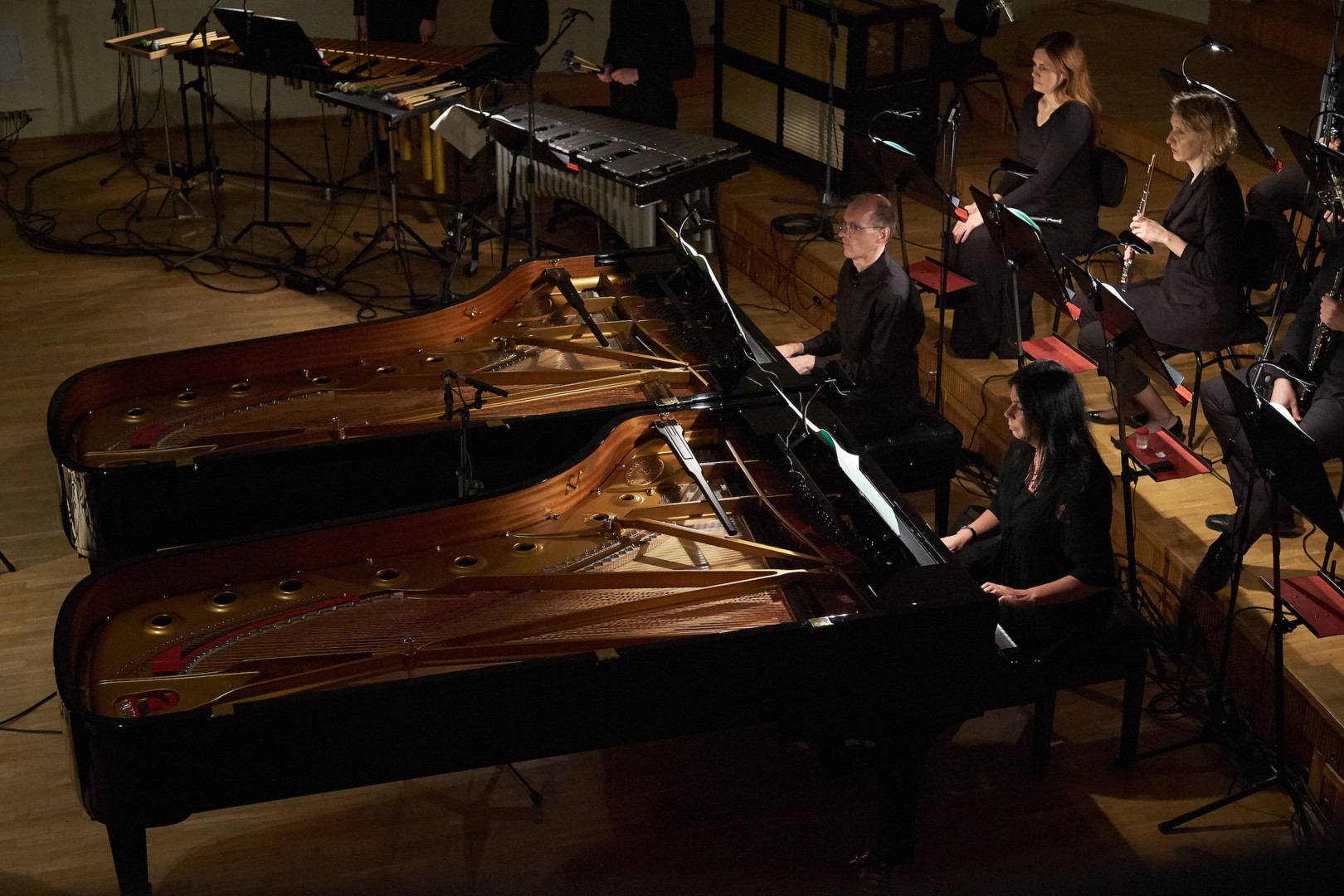 American minimalist composer Steve Reich’s “Music for Ensemble and Orchestra” (2018) had its maiden performance in Estonia, played by the Estonian National Symphony Orchestra (ERSO) Friday night. Another new Reich offering, “Reich/Richter” (2019), also got its debut in Estonia. Dario Cavegn went along to the performance, at the Estonia Concert Hall in Tallinn, and sent us this review.

“Music for ensemble and orchestra” is Reich’s first orchestral work in many years, bound to take the composer out of familiar territory — and do the same for the conductor and orchestra too.

Unless performed by ensembles that, at least to an extent, specialize in his work, Reich, 83, tends to have the unfortunate effect on musicians of forcing them to focus on the score so intensely that some end up playing note-by-note, which can make a performance sound unpracticed and strained.

None of that was in evidence with ERSO on Friday night, however. Conductor Olari Elts succeeded in staging a performance that will have left no Reich aficionado in attendance disappointed. Confronted with a piece no doubt far removed from his orchestra’s everyday comfort zone, Elts nonetheless managed to imbue it with a dynamism and purpose that did Reich justice.

The piece relies heavily on the work of a core ensemble, using the accompanying orchestra as a means of support, rather than assigning it a prominent role. The violins and violas of this core were one of the highlights of the concert, delivering an outstanding performance and unerringly carrying the stage-filling concerto grosso lineup through even the most challenging shifts, always keeping things on track.

The film is based on a sequence of two-pixel images which keep splitting and shrinking, something Reich has said gave him the idea of using a two-note oscillating pattern, and developing the music  of his piece along the images of the film.

“Reich/Richter” builds on this interplay of Richter’s Rorschach-like shifting images, and Reich’s unique composition style. Appearing decidedly more relaxed than he had during “Music for Ensemble and Orchestra”, conductor Olari Elts and his ensemble navigated the piece with precision, allowing the audience to trace every detail and quirk of the composition.

Any performance of Steve Reich’s music is an extraordinary event, first and foremost because they are rare. Reich tends to require ensembles to step away from what they usually do, often forcing them to take a more mechanical approach to how they play their instruments, demanded by a quality in his music that has been described as repetitive, oscillating, and often straying into the technological.

Another reason is that Reich’s music takes the listener beyond what they would usually understand to be classical music. If you have never heard Reich, you don’t really have an idea of the actual, possible range of classical music.

Along with others like Philip Glass and Terry Riley, Steve Reich is one of the most important minimalist composers today. Quite distinctly from the preceding two composers, who have both experimented with a wide range of different approaches, Reich has remained true to his original direction, creating an oeuvre which has also heavily influenced the development of ambient and electronic music.

Being able to attend a Reich concert in Estonia itself is also a significant event. Friday’s “Music for Ensemble and Orchestra” as well as “Reich/Richter” were both firsts here, and especially seeing the latter performed along with its visual art component is exceptional, since this combination has now made it from New York to Tallinn in the space of over a year and despite the pandemic.

There was very little that could be taken away from a fantastic job by the conductor and the orchestra. One regrettable detail was that the live music naturally reverberating in Estonia Concert Hall, in combination with its powerful sound system, and the vibraphones coming together with the supporting orchestra in “Music for Ensemble and Orchestra” tended to create a deafeningly loud trill on the high notes, which rolled down the sides of the hall, was painful to the ears, and prompted at least one member of the audience to actually bolt out of her seat and leave the room in rather a huff.

Still, it didn’t seem so out-of place for such a great performance that there should be signs of life in the audience as well. Once again I’m struck by the fact that in a comparably small and remote city like Tallinn, such grandiose art can still be enjoyed.

ERSO’s roots date back to 1926, during the First Estonian Republic, when a trio headed by Hugo Schütz performed the first concert ever broadcast on radio in the capital. This ensemble grew steadily over the following years into a full-blown symphony orchestra.

Starting with the current season, the orchestra’s chief conductor and artistic director is Olari Elts. The orchestra is today made up of 100 symphonists, and performs an average of 60 concerts each season.

The Estonia Theater is home to the National Opera (Rahuvsooper) and the National Ballet, discrete organizations from ERSO.

Steve Reich, born 1936 in New York City, has been described by Guardian music critic Andrew Clements as one of: “a handful of living composers who can legitimately claim to have altered the direction of musical history.”