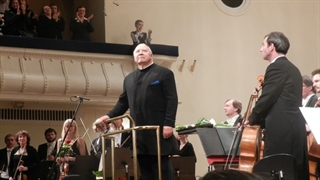 The Hardanger fiddle is a special type of violin originating in Norway some 400 or more years ago. Its origins are the Hardanger Fjord area of central Norway, hence the name. It looks much like a conventional violin, though it has eight or sometimes nine strings: the normal four plus four or five ‘sympathetic’ strings underneath them that create a haunting echo effect. Ragnhild Hemsing is a comely lass from Norway who plays the Hardanger fiddle. She was nice enough to come to Tallinn’s Estonia Concert Hall last Friday night to show us what it is all about.

What the Hardanger fiddle is about is rustic, evocative and vigorous; a sound aptly suited for a country church (where it is often played) or even a barn dance. This is not a musical aesthetic frequently appreciated in the concert hall, but ERSO, in its wisdom, brought it to one. Hemsing was there to play a song by her countryman, Johan Halvorsen, himself a violinist of some renown and a composer from the late 19th through the first third of the 20th century. ERSO’s principal conductor Neeme Järvi has taken a shine to Halvorsen and has recorded some of his orchestral work. The idea is that Halvorsen, outside of Norway, is little known and the broader music loving public should get to know his stuff. I think this is laudable.

The program began with a complex floral bit of business, Halvorsen’s “Bergensiana”, described as “rococo variations on an old melody from Bergen.” It conjured images of a fawn skipping across a dewy meadow on a spring day, which was a nice thought to contemplate on an evening of -25 Celsius. There was a part for mandolin which was pleasing and surprising. “Bergensiana” was a short piece, coming in at around fifteen minutes, and was a nice springboard to what came next.

The featured performer for the evening, Hemsing, took the stage with her elaborately decorated fiddle, for another Halvorsen piece, the “Fossegrimen Suite”, opus 21. The suite’s title refers to a mythological water sprite which I presume lives in or around a fjord. Here was foot-stomping, rural music with a distinctly folk culture quality. It brought out my inner Norwegian hayseed, as I am sure it did for others.

Hemsing looked a little pensive, but played beautifully. There is a magical intonation in the Hardanger fiddle, its plaintive wail ricocheting off the walls of the concert hall. Hemsing’s contemplative expression gave way to a broad smile as the piece concluded. We were even given a little encore.

After intermission we got a big piece from Brahms, part of a series of his works by ERSO. The work was the Symphony No 2 in D Major, Op 73, vast, long in duration and covering a panoply of emotional and textural changes. Neeme Järvi likes Brahms; there was intensity and pleasure in his conducting, and a fair amount of sweat pouring from his forehead. But I think when most concertgoers filed out into the deep-freeze, they were thinking of the fjords and the girl with the fancy violin.