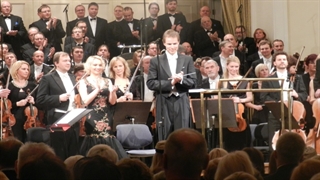 Friday night’s ERSO program was a twofold celebration: for composer Ester Mägi’s 90th birthday and for the wonderful art she has created over her long life.

Ester Mägi, the senior lady of Estonian music, turned 90 on January 10, so it was only fitting to have an evening full of her music played by some of Estonia’s finest soloists and the Estonian National Symphony Orchestra (ERSO) under the baton of one of its young conductors, the sleek and fluid Mikk Murdvee. And it was good too to see continuity from a few of the younger soloists who were not even alive at the time the pieces they performed were penned.

Mari-Liis Uibo was a case in point. The young violinist led off of the night with some gorgeous haunting stuff. Mägi is known for her rustic musical sensibilities; an attention to Estonia’s folk music traditions suffuses much of her work. The piece “Kadents ja teema” (Cadenza and Theme) had the plaintive wail and stark beauty of a Celtic air. Uibo’s second song was Mägi’s “Presto” from 1967, a more modern number with staccato violin and complex interactions with pianist Peep Lassman, who accompanied. “Presto”, with its unusual time signatures and dissonance, showed, as indeed did the whole program, that Mägi is an artist difficult to pigeonhole. For every work that was an homage to Estonia and folk aesthetic, there was something else challenging, unexpected and thought provoking.

Mägi’s life traverses the strange and cataclysmic arc of her homeland. Born during Estonia’s first independence, she has lived long enough to see over 20 years of its second and all the stuff in between. And of course this can’t help but affect her art and its subject matter, from nationalism to modernism. A long life that has seen so much has informed her musical world with wisdom and pathos.

There was nothing austere about the evening’s finale. After the intermission, the Estonian National Symphony Orchestra took the stage for two numbers, the short “Vesper keelpilliorkestrile” (Vesper for String Orchestra) and the pastoral “Bukoolika” which seemed to musically reveal a passing day. There was a neat part for celesta. But the night’s last piece was a bravura display of excess, the perfect foil to the earlier spare arrangements. The orchestra was accompanied by the Estonian National Male Choir for the cantata “Kalevipoja teekond Soome” (Kalevipoeg’s Journey to Finland), a musical narrative from the national epic. This was big, beautiful sound with musical mot juste. Its celebratory nationalism denotes the year of composition: 1954, one year after Stalin’s death. A little thaw for the arts that would take many decades to melt into free expression. Something Ester Mägi would know a lot about.