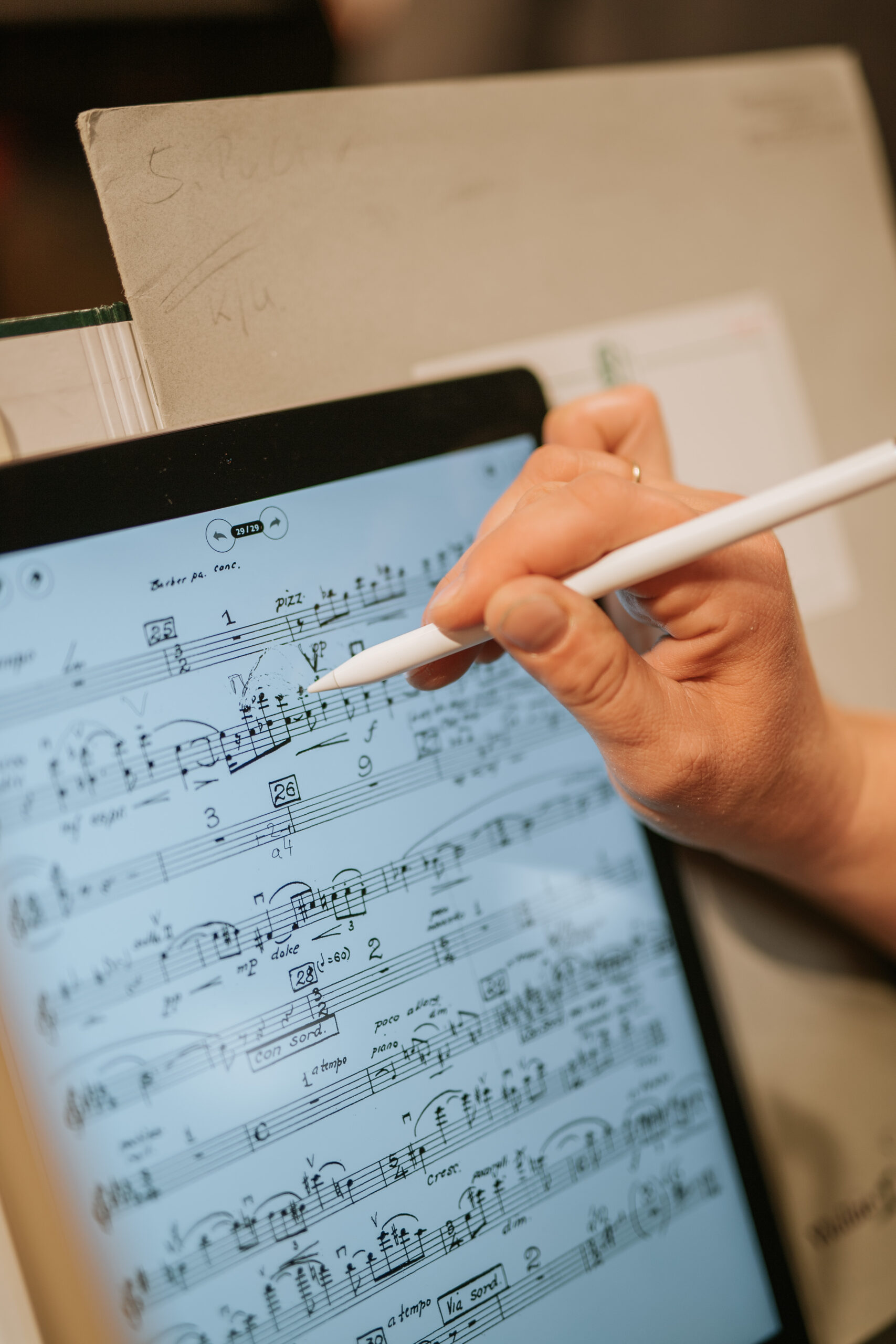 This week marks the first time ENSO will be testing an innovative solution that promises to replace traditional sheet music with digital scores. Members of the orchestra will be testing a solution developed by an Estonian start-up company ScoreMusic, providing digital scores for professional musicians as an alternative to the usual paper scores. The ScoreMusic cloud service connects sheet music publishing companies and musicians all over the world, and updates some everyday tools that have been used for centuries: replacing paper, pencils and erasers with digital paper and pencils.

According to Kristjan Nõlvak, the founder of ScoreMusic, the web-based ScoreMusic Marketplace will make digital scores available for orchestras, choirs, soloists and chamber musicians, music students and teachers. “It’s possible to buy and rent digital scores, in compliance with copyright regulations. The software also makes it possible to create different lists, arranging the scores in the required order during a rehearsal or at a concert, for example,” Nõlvak asserts.

Compared to paper scores, digital scores have many advantages: the musical ensemble no longer has to enter into separate agreements with the publisher and designated copyright representatives, no rented sheet music will be sent by mail, the publishers no longer have to print and mail several paper copies of a single composition for clients all over the world, and there will be no need for rehearsal copies. The musicians are also able to save all of their notes scribbled on the score, which are lost whenever a rented paper score is sent back to the publishing company. All of this translates to savings in time and money.

A consultant for the start-up ScoreMusic, Andrei Korobeinik, said that ScoreMusic is yet another example of how technology optimises processes in various industries, “Uber is making it easier to get a taxi, Transferwise makes buying foreign currencies quicker and at a better price – there are many examples. ScoreMusic saves money for sheet music publishing companies (an average publishing company in Europe spends approximately one million euros on postage fees every year) and increases their client base. The life of musicians will become easier, and the notes they’ve made are still there if they perform a piece again many years later. Kristjan, who’s in charge of the ScoreMusic project, still has some big challenges ahead – he’s trying to change a market that’s very conservative – but someone’s going to do it, sooner or later. And because ScoreMusic is developing very fast, they’ve got a rather high chance of being successful,” Korobeinik noted.

Johannes Kiik, a trombonist working for ENSO considers a tablet to be much more comfortable than using sheet music, “You turn the pages using a pedal, which makes the whole experience a lot more convenient. If I’m playing from a paper score, I have to grab the instrument in one hand, and use the other hand to turn the page, but now I can just use my foot. During an hour-long rehearsal, it only took six per cent of the battery life, so there’s no need to worry about batteries going flat during a concert.”

According to ENSO’s General Manager, Kristjan Hallik, ENSO fully supports the future-oriented mind-set that is noticeably present in this Estonian start-up company, “Digital scores are definitely the way of the future, and the software solution we’re testing already allows us to use many positive aspects of the e-solution. Therefore, the national orchestra of an e-state is definitely the right place to test the solutions of the future. It’s also positive that international publishing companies have started to show interest in the service. There’s hope that this will be the next international success story regarding smart solutions from Estonia, which can be a game changer for the entire industry,” Hallik said.