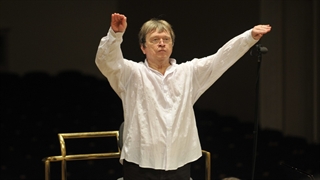 The Estonian National Symphony Orchestra (ERSO) ended a wonderful and eclectic season last Friday evening. Finishing with a bang, the program was a single symphony.

Gustav Mahler’s Symphony No. 3 in D minor is the behemoth of symphonies. A titanic work that stretches for 100 minutes or more, it is the lengthiest in the standard repertoire. That doesn’t mean it has to be tedious, or a piece of art merely to be endured. Like a Tolstoy novel, the No. 3 should be savored minute by minute and enjoyed. The time passes quickly.

Nikolai Aleksejev, principal conductor of ERSO from 2001-2010 was at the podium, leading with the aplomb and economy for which he is known. The highlights for Mahler’s Third come in the fifth movement where choral work and solo soprano is employed. Mezzo-Soprano Hermine Haselböck sung a beautiful passage, an homage to Friedrich Nietzsche’s “Also Sprach Zarathustra,” after a children’s and ladies choir added to the mix. Mahler’s work chronicles mankind’s evolution, through the composer’s musical imagination. It is something like a tone poem; a fascinating bit of fin de siècle European culture, inspired by the natural beauty of Mahler’s country estate in Germany, written over the final years of the nineteenth century.

ERSO’s program throughout the year proved as ambitious as the finale. Numerous guest soloist and conductors made their appearance. Olli Mustonen showed that ERSO is cutting edge. The Finn played his own work “Jehkin Livana,” dedicated to the folk musician of the same name; a unique piece reworked for orchestra that showed Mustonen’s passionate conducting style. He also plays Beethoven as perhaps no one else. The Piano Concerto in D major, OP. 61 was a chance for Mustonen to shine; conducting with his left hand while playing with his right, he was all over the keyboard like a jazz pianist.

In March two older men of the Soviet era graced the stage of the National Concert Hall. Nikolai Petrov played with all of the skill and verve which have made him one of the renowned pianists of his generation. Petrov’s playing on Beethoven’s Piano Concerto No.3 in C Minor, Opus 37, was memorable for its virtuosity. Conductor Eri Klas showed he wasn’t afraid of new challenges, putting the Estonian National Symphony Orchestra through the challenging paces of young Finnish composer Sebastian Fagerlund’s “Isola.”

ERSO should be commended for straying from the standard canon with the efforts of young composers and lesser-known works. April saw the symphonies of two Estonians performed, Eino Tamberg’s Ballet Symphony, Opus 10 and Rein Rannap’s “Concerto grosso in uno movimento.” Tamberg passed away last Christmas, but Rannap was there to play his own piece on celesta, a kind of music box-keyboard, and harpsichord. Conducting on that late April evening was Latvian Ainars Rubikis, a young up and comer frequently mentioned along with Venezuelan phenomenon Gustavo Dudamel as a leading light for the present and future.

The cultural contribution ERSO makes to life in Tallinn is hard to overestimate, and it is certainly heartening to witness large and enthusiastic crowds at the National Concert Hall. The Estonian National Symphony Orchestra itself deserves plaudits for its outstanding talent and professionalism through difficult times. World-renowned maestro Neeme Järvi will be returning to his post as artistic director of the National Symphony Orchestra at the start of next season after some in-fighting in government circles. This stability can do nothing but make things better.

Hats off to the fine musicians of the Estonian National Symphony Orchestra. The final program of the year, Mahler’s Third, showed the orchestra’s versatility. A special thanks, too, to the administrative folk at ERSO who provided concert goers to the season finale with whisky and candy gratis at show’s end. One would be hard pressed to think of a greater inducement to the world of high culture.