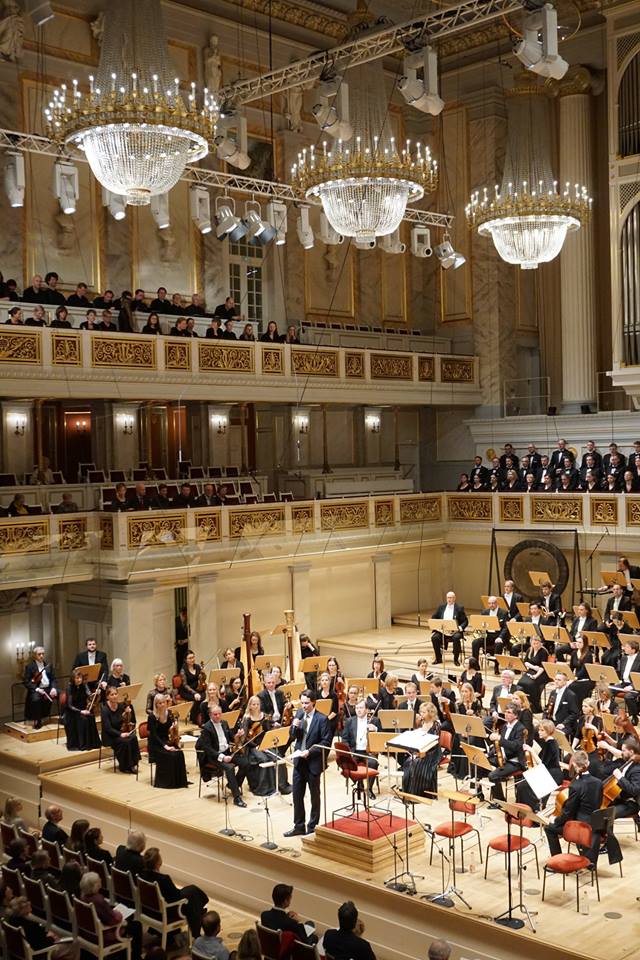 Punching well above their weights, population-wise, on the international music scene, Estonia, Latvia and Lithuania are celebrating, and being celebrated, in style over the year of their 100th birthdays. Berlin has just finished a 10-day “Festival Baltikum” at the fabulously recreated, Schinkel-designed Konzerthaus in the old city centre, in which championship of a massive Estonian oratorio finally reached Germany’s current capital of musical culture. Leipzig, its second in terms of size, if not ambition – where the composer Rudolf Tobias first conducted the disastrous 1909 premiere of the oratorio, Des Jona Sendung (Jonah’s Mission) – meanwhile welcomed one of the world’s top five younger-generation conductors, Latvian Andris Nelsons, as its 275-year-old orchestra’s 21st music director.

Nelsons’ inaugural concert was not quite the brilliant fanfare it should have been – put that down to programming and a less than successful first half – but there’s no question of the inspirational spark which left the City of Birmingham Symphony Orchestra in long-term mourning over his departure (they’re happy now, and rightly so, with another already great Baltic conductor, Mirga Gražinytė-Tyla). The big event of the two, for me at any rate, was veteran Neeme Järvi conducting the handsome Estonian National Symphony Orchestra, with its utterly distinctive brass ensemble, in the Berlin premiere of Des Jona Sendung (Joonase lähetamine is the Estonian title, but the German language and the German public were its original targets).

Reconstruction of the score was a labour of love on the part of a remarkable man who played an active political role in the restoration of Estonian independence, the musicologist and pianist Vardo Rumessen, who died in 2005. When I met him in Tallinn in 1989, he was already driven by his passion for the Tobias oratorio and gave me a copy of his first booklet on the subject. Estonia’s greatest ambassador abroad, Järvi senior, who left Soviet Estonia for America with his family in 1980 and who returned for the first time that year, had a passionate belief in the music’s value and urged me to approach successive BBC Proms directors to get the work performed there. I had no success, but I also refrained from listening to Järvi’s 1995 recording. If a work of this scale didn’t impress in the restrictive light of CD, it might put me off; the live experience had to be the thing. Now that I’ve finally heard it, I know Järvi was right: this is the perfect Proms spectacular.

Jonah’s Mission in the Rumessen reconstruction calls for a large orchestra, five soloists including a bass-baritone for the crucial role of the prophet himself, organ and substantial choral forces; Konzerthaus size limited the numbers of the Latvian State Choir, Cantus Domus and the children of the Staats- und Domchor Berlin, while the Albert Hall could probably afford at least 100 more, and its extra advantage would be to place Tobias’s Chorus Mysticus up in the gallery.

Nevertheless this was still a spectacular with the flowing sense of occasion that only a conductor of Järvi senior’s stature and sense for atmosphere could muster. Now in his 81st year, he needs to sit at the podium from time to time, but used the contrast with the full-height moments to great dramatic effect. (When I interviewed him the following day he wryly impersonated the great Hans Knappertsbusch in old age rising majestically from his chair.) The joining of forces might have benefitted from a few more rehearsals, but no one could better manage the sweep of the big choral and orchestral outbursts, or the eerie atmosphere that Tobias conjures in the first four numbers of Scene II, “The Night of Being Forsaken by God” (Jonah in the belly of the whale).

Is Tobias derivative? It’s true that the mighty fugue at the end of that second part is indebted to the examples in Brahms’s Ein Deutsches Requiem. Parts of the storm at sea can sound a bit generic. But little else sounds quite like any other composer. You could call some of the harmonic progressions gauche, but they sounded individual in a live context; the wildness of the religious zealots in Scene III, “Ecclesia”, is hair-raising, and if the heedless revels of the people of Ninevah in Scene IV, “Judgment”, inevitably seem polite compared with the Babylonian processionals of Walton’s Belshazzar’s Feast, composed over 20 years later, they contrast operatically with the imprecations of Jonah. The role has surely never had a more jaw-droppingly powerful interpreter than Estonian Ain Anger, the real bass article and an artist with an ability to lift the key drama right off the page.

On that evidence, it seems a pity that Tobias felt obliged to adopt the format of so many stop-start numbers – 38 in all – since he has a real scene-painting flair that he doesn’t always set straightforwardly to work. Judgement on the final chorus, which goes into unexpected spheres including a Nielsenesque pastoral, should be reserved until Estonian choral conductor Tõnu Kaljuste premieres his new performing version this summer; apparently much of this was Rumessen’s work. But if so, it’s splendid, and no one would forgive Kaljuste if his authenticity didn’t find a place for the massive tam-tam crashes in an undoubted highlight, perhaps the most overwhelming Sanctus setting in any choral work (even bearing in mind Bach’s and Verdi’s heaven-stormers).

That came as an encore which drew a standing ovation. Estonia can be happy that Berlin approves. Which it also did, equally deservedly, a perfect “espresso-konzert” at two pm in the Konzerthaus’s state-of-the-art Werner-Otto-Saal. Co-leader of the Estonian National Symphony Orchestra and a vibrant presence in Paavo Järvi’s Estonian Festival Orchestra, Triin Ruubel is up there among the top violin soloists, and her twin sister Kärt is also forging a career as a pianist. They chose an all-Estonian programme ranging from salon charmers by Heino Eller as well as an unusual bonne bouche by that otherwise deeply serious symphonist Lepo Sumera – familiar in its orchestral guise as a favourite encore of Paavo Järvi in Pärnu – to three more substantial works.

Tubin’s flamboyant Capriccio brought Kärt Ruubel’s virtuosity to the fore – dazzling partnership here – and Pärt’s somehow always deeply moving and meditative Spiegel im Spiegel tested her crystalline evenness and Triin’s long line to limits that relied on intense concentration from the audience. It was fascinating, too, to hear Conversio from Pärt’s very different junior by 24 years Erkki-Sven Tüür: a minimalist mechanism that breaks down across the compellingly-sustained span at which Tüür excels.

Triin Ruubel’s line and ardour should have been matched by Latvian star violinist Baiba Skride in Berg’s Violin Concerto at Nelsons’ Leipzig inaugural concert two evenings later. Skride, however, was often nearly inaudible in a hall which usually catches every nuance; much more came from the low and middle-range lines in Berg’s spider-web of sound. One fascinating link with the Ruubels is that Baiba also has a hugely talented pianist sister (albeit not twin), Lauma. I was captivated by her recording of Fanny Mendelssohn-Hensel’s Die Jahr, a collection of 12 piano pieces the manuscripts of which, beautifully illustrated by Fanny’s artist-architect husband, can be seen on the second floor of Leipzig’s stunning Mendelssohn House Museum. Flooded with light on a brilliant winter afternoon, the first floor where Mendelssohn lived with his wife and his five children has been lavishly reconstructed; it is fine and apt that the sister he forbade to publish her works has much of the floor above devoted to her, alongside the Kurt Masur Archive.

The hall which then-Kapellmeister Masur oversaw through to its opening 37 years after the destruction of the previous Gewandhaus in World War Two has a democratic layout similar to Berlin’s Philharmonie, but the sound is warmer, and the innate culture of the Gewandhausorchester is a thing of wonder in its generous home. Nelsons has already begun to mould that to his own fiery but disciplined personality in several Bruckner recordings; and his interpretation of Mendelssohn’s “Scottish” Symphony, No 3, was full of his atmospheric pianissimos – not for nothing did he study with Neeme Järvi, among others – and his ineffable rubato in phrasing, the ultimate skill in creative conducting which his predecessor, Riccardo Chailly, never had to the same degree.

It was a shame, though, to waste the inaugural-commission slot at the beginning of the concert on Steffen Schleiermacher’s Relief. Its generic start did give way to some interesting brass sonorities, but the strings were woefully under-engaged – the piece, though described as a Concerto for Orchestra, could be scored entirely without them – and there was no sense of dynamic celebration here. That had to wait until the following morning in the handsome great hall of the Altes Rathaus right in the centre of Leipzig’s old town, with worthies from the early 15th century through to the 18th looking down on Nelsons’ official inauguration.

Speeches from Mayor Burkhard Jung and Latvian Ambassador to Germany Inga Skujina, punctuated by light but revelatory Reinecke and Klughardt from Gewandhaus musicians, were warm and witty; Nelsons’ own, in thickly accented German, charmed in its brevity, punctuated with bursts of laughter. Plain “Andris” on posters all round the city, he is a true Mensch, no doubt about that. Leipzig is lucky to share him with Boston; the world already benefits from recordings and performances in both cities and there will be much more to come.