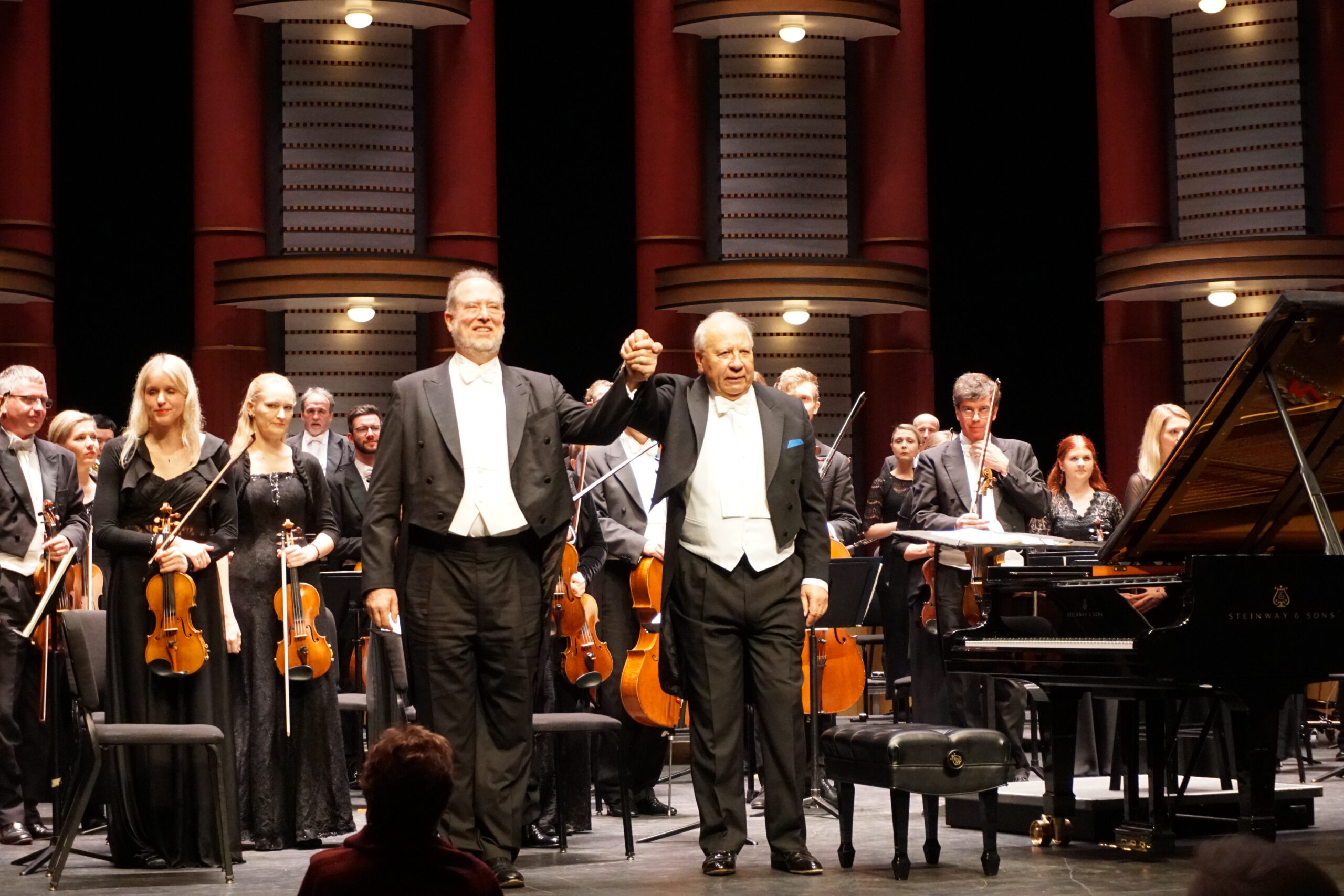 The Estonian National Symphony Orchestra proved a real musical sleeper when it played a superb concert at the Kravis Center in 2013. That performance impressively displayed an orchestra of world-class stature from the Baltic nation.

On Monday night the Estonian ensemble returned to West Palm Beach. This time the orchestra’s venerable artistic director and principal conductor Neeme Järvi was on the podium.

Surprisingly the program opened with Homeland Tune by Estonian composer Heino Eller, the work that the orchestra offered as an encore at its previous South Florida appearance. Scored only for strings, this brief sentimental and nationalistic vignette immediately demonstrated the group’s unique sound. With the violins divided on either side of the conductor—six basses on the far left and violas and cellos across the middle–these players produce greater depth of tone than most American or European orchestras. Their corporate sonority is dark and rich.

Garrick Ohlsson is a familiar visitor to South Florida concert stages and Brahms’ Piano Concerto No. 1 in D minor is hardly a rarity on orchestral programs.

Yet Ohlsson and Järvi brought some fresh insights and interpretive quirks to a performance that was far from conventional. Järvi’s tempo in the orchestral introduction was unusually slow but he drew out the lyricism and undercurrent of tension in the brooding second theme. There was more than a small dose of Chopinesque elegance and romanticism in Ohlsson’s approach to the first movement but he also had the steel-fingered aplomb for Brahms’ keyboard outbursts. There were a few slips in the horns but the reedy and tangy winds were a real treat to hear, especially when melded delicately with the piano by Järvi.

The orchestra’s strings soared through the noble melody of the Adagio which Järvi shaped poetically. Ohlsson’s sensitive playing captured the yearning and ardor of Brahms’ interlude between the stormy outer movements. Setting a rapid pace for the final Rondo, Ohlsson’s digital dexterity swept through the principal subject while bringing a more measured aura of grandeur to the secondary theme. Instrumental balance between choirs was near-ideal and the fugal sections were given unusual precision. Järvi made every instrumental line clear and audible.

A standing ovation brought Ohlsson back for an encore of Chopin’s Waltz in C sharp minor. The 1970 Chopin Competition winner played with a lightness and rhythmic brio that did not neglect the waltz’s underlying melancholy.

Järvi has long been a distinguished Sibelius conductor. Kudos to him for closing the program with the Finnish master’s Symphony No. 3 in C Major rather than one of the more frequently played symphonies.

While the Third Symphony is too rarely heard outside of Finland, it represents Sibelius at the peak of his creative powers. The 80-year-old Järvi is still a lively figure on the podium with a clear beat and purposeful gestures. The vigorous opening figure of the symphony was given high gloss treatment as it was passed from the strings to winds and then brass. Climaxes had granite-like solidity and Järvi maintained rhythmic urgency and forward motion right up to the conclusion of the first movement.

The waltz like melody of the Andantino con moto is one of Sibelius’ most beguiling creations, and Järvi’s no-nonsense direction gave it due lilt and grace. Wind sonority was hefty and the strings’ pizzicatos emerged clean and crisp. The cascading melody in the winds that opens the final movement had plenty of zest without becoming breathless. As the typically Sibelius melody that concludes the symphony vibrantly emerged in the strings, Järvi built the big crescendo in gradual layers with the climax taking on cumulative force.