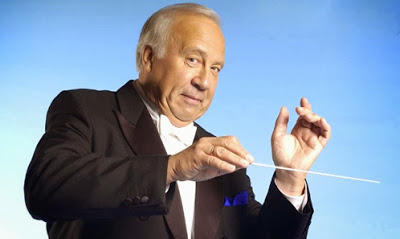 Estonian conductor Neeme Järvi is of the old school, and not just because the conductor is now 76. On Sunday evening, he brought the Estonian National Symphonic Orchestra and the Estonian Philharmonic Chamber Choir to the White Light Festival at Lincoln Center. Their purpose: a program of Sibelius, Tormis, Mozart and Arvo Pärt at Avery Fisher Hall. Billed as The Word Made Flesh, this concert was part of this year’s White Light Festival.

The concert opened with Veljo Tormis’ stormy Overture No. 2, one of a handful of orchestral works from this Estonian composer. Mr. Järvi immediately demonstrated the value of this piece, bookended by stormy, passionate outer sections that recall the fierce charge of Shostakovich at his very best. The central passage of the overture was more lyrical, with opportunities for the ERSO woodwind players to demonstrate their quality before the first theme returned to bring the work rampaging home.

Arvo Pärt’s  name might still be familiar to White Light attendees who may have never heard his music. It was a quotation from Mr. Pärt that inspired festival director Jane Moss to start programming Lincoln Center’s fall season with an eye toward common threads of music, art, dance, and spirituality. And given his importance to the musical development of his native Estonia, it was particularly fitting to have Mr. Järvi conducting the New York premiere of the composer’s In principio a choral setting of excerpts from the Gospel according to John.

In principio was in five sections, with the chorus intoning the Latin text over a steady rhythmic pulse from the orchstra. As each section developed, the sound swelled and engulfed the listener with slab-like chords of instruments and voices, emphasizing the solemnity of the Biblical subject. Mr. Järvi expertly balanced chorus and orchestra to maximum effect, creating a powerful statement of faith–not just in God but in the power of Arvo Pärt’s music to communicate and heal.

Two short works ended the first half: Mr. Pärt’s equally static and moving peace prayer Da pacem Domine and Mozart’s Ave verum corpus, a short motet for chorus from the last year of the composer’s life. Following this work, Mr. Järvi put his hand to his ear to draw the appropriate level of applause from the Sunday afternoon audience. He then returned to the podium and conducted the three-minute Mozart work a second time (at a slightly faster tempo) with the same perfect blend of voices and sacred meaning.

The chorus was absent for the second half of the program, which consisted of Sibelius’ beloved if unconventionally structured Fifth Symphony. Mr. Järvi conducted these three movements with an ear for the rustic sounds of Finnish folk music, bringing a burly vigor to passages for woodwinds and strings and allowing the majestic brass parts to make their own statement. The complex architecture of the first movement seemed to develop organically, as did the mighty climax of trumpets and horns that caps the central slow movement.

This unconventional, but effective approach to the Fifth continued in the famous finale, anchored around a tolling bell-like theme in the double basses, horns and flutes. Mr. Järvi drew the melancholy answering cello line out with a subtle baton movement, breaking hearts with just a flick of his fingers. The movement’s centralfugato for strings was played pianissimo, with the complex harmonies taking place like whispered conversation before the welcome return of the big final theme. The six final chords of the Fifth were not the end of the evening, as Mr. Järvi obliged the now-enthusiastic audience with a brisk, energetic performance of Sibelius’Valse triste.