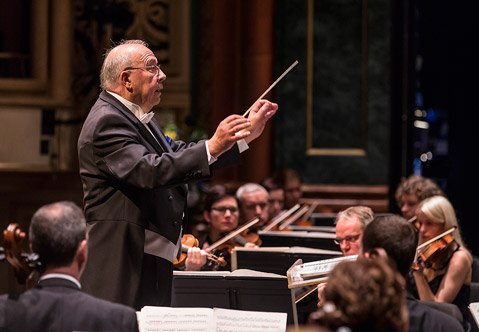 A spirit of Estonian economy and etiquette seemed to preside in the Granada Theatre last week. Maybe it is something learned in the cold northern European latitudes. Maybe survival depends on minimizing waste. Whatever the case, there was no en massewarm-up on Wednesday — no one was onstage except empty chairs and unclaimed cellos and double basses napping on their sides. There seemed to be a message here: Music deserves a setting of silence.

The musicians floated in from the wings of the stage, and with a single chime commenced the rolling, mesmeric, slow-mo waterfall that is Arvo Pärt’s “Cantus in Memory of Benjamin Britten.” Estonia’s most famous composer wrote this tribute, a jewel of purity constructed entirely of descending A-minor scales, as he was rebounding from his own forays into atonality. Maestro Neeme Järvi’s manner blended perfectly with this scene. The 76-year-old conductor, whose elbows rarely stray from his sides, shuns frantic gestures. “It’s more about body language,” he has said, “a flick of the wrist.”

It was a smooth transition (across the Baltic Sea) to the open vistas of Finnish composer Jean Sibelius’s Symphony No. 5. This work is a study in broad surfaces, sustained textures, and gorgeous chord colors. At first, the audience released only sluggish applause, until the maestro leaned forward and cupped his ears. This Sibelius, to be sure, was no small accomplishment. Those who remained after intermission were rewarded with an inspired and intelligent performance of Johannes Brahms’s Symphony No.2, the Beethoven-like exuberance of the last movement carrying the audience to its feet.