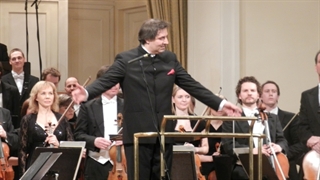 Were you in Tallinn last Friday night? Did you stay in and watch “Eesti Tippmodell” or reruns of the new “Hawaii 5-O”? Or were you at Nimeta alternately goggling the fetching barmaid and last week’s rugby league game? All, to be sure, defensible activities. But you could have seen a truly inspiring spectacle at the just two-thirds filled Estonia Concert Hall.

To my reckoning crowds for ERSO’s concert season have been stellar. The sparse audience Friday was a rarity but we enjoyed a superb program. It spanned epochs and orchestral genres but mined the same artistic ore: the stuff of mind and soul expanding musical experience.

The performance began with Latvian Peteris Vasks’s orchestral arrangement “Viatore”, dedicated to his friend Arvo Pärt. Vasks, like Pärt, often makes musical composition a gateway to the spiritual. He once described his approach as an attempt to “provide food for the soul.” “Viatore” was a beautiful beginning to the evening. Scored for strings, it was alternately solemn and sublime. There were passages which conveyed a peculiar musical patina; like something plucked from the past, a kin to Vivaldi.

Next came two works from the man himself; Pärt’s “Concerto for Trumpet” and the arrangement “Wenn Bach Bienen Gezuchtet Hatte”. These two works display Pärt’s extraordinarily diverse musical palette. Confining Pärt to the role of musical guru of the ethereal would be a mistake. ERSO’s principal trumpetist Indrek Vau had equal measures of strain and fun with Pärt’s “Concerto”, a brassy and buoyant bit of business. Pärt’s orchestral arrangement was playful, suspenseful and weird.

The first half of the program concluded with Bach’s “Passacaglia and Fugue in C Minor”. The great German was a leitmotif of the evening as Pärt’s trumpet concerto was on a theme by Bach and the program was called Passacaglia, which refers to composition in triple-metered form commonly in minor keys. Bach, the great innovator, created one of the most famous passacaglias with this piece. Bach’s work was rich, luxurious, gorgeous music played with consummate skill by ERSO. Guest conductor Daniel Raiskin bounded around thoroughly enjoying the Baroque genius of Bach.

After intermission the evening concluded with Sibelius’s Symphony No 1 in E Minor, OP 39. A longish piece of late romanticism, the No 1 had the verve of its antecedents in the genre, but with decidedly modern elements. The third movement particularly, with its changing tempos and insistent percussion, marked this work for its place in fin de siècle Continental culture.