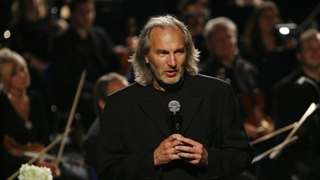 Arvo Pärt is as Estonian as Christmas Eve and blood sausage but more beloved. This point was driven home when I arrived a few minutes late to the Noblessner Foundry at a particularly quiet moment in the First Symphony and, fumbling around for my place in the dark, was met with more than a few vexed stares. A note to readers: if you are attending an event at Noblessner on foot, you cannot reach it from the path that runs behind it by the sea (unless you walk through Kalamaja Park). Another sign of Pärt’s veneration: the girl with her date weeping bitterly on the same footpath when they recognized that they too would be late.

Thankfully, seating was general which made tardiness less intrusive. The Noblessner Foundry again has proved a worthy venue for high culture; the often minimalist music of Pärt finding a resonant chord in the stark surroundings of the old metal-works. Seeing a full orchestra in fancy-dress in such a setting was indeed striking.

Friday was a special night because for the first time all four of Pärt’s symphonies would be played in one program, and of course, who better to perform this musical feat than the Estonian National Symphony Orchestra under the baton of Nargenfestival director Tõnu Kaljuste. The Nargenfestival put on the Arvo Pärt Days program of which Friday night’s show was the featured event.

The arc of Pärt’s life is a story well-known to Estonians and follows the familiar path of repression, emigration and return home. Finding life as an artist in the Soviet Union increasingly difficult, Pärt was allowed to leave Estonia in 1980, living in Vienna (and elsewhere) and gaining Austrian citizenship. He only returned some twenty years later, after independence. This means a good chunk of Pärt’s working life was spent in exile, although three of his four symphonies were composed before leaving Estonia and the fourth upon his return.

Symphonies 1-4 show the development of Pärt from conservatory student to one the world’s most celebrated living composers. Pärt’s works challenge the listener. If you’re used to point A to point B linear progressions and euphoniousness a la Bach, Mozart and Beethoven, then Pärt can be troubling. Unusual time changes, sudden thunderous percussion, a bit of dissonance, all mark the early works as decidedly modern orchestral constructions. Intermixed with this are passages of sublime beauty.

The last symphony for the evening, the Fourth, Los Angeles, displayed this ethereal quality. It was written in Pärt’s famous creation: the tintinnabuli. Pärt once described the meaning of this type of composition: “Tintinnabulation is an area I sometimes wander into when I am searching for answers – in my life, my music, my work. In my dark hours, I have the certain feeling that everything outside this one thing has no meaning.”

This was the piece that I didn’t want to end. The industrial setting with this music brought to mind Baudelaire’s dictum on art that “one part is ephemeral, the other eternal.” The Fourth Symphony is the eternal part.