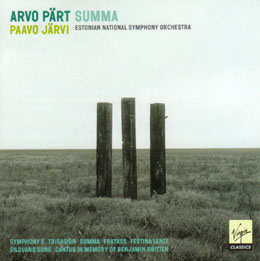 “A meatier Pärt than we usually hear, and a dramatic version of the Third Symphony that should win him many converts. With Arvo Pärt the terms of comparison normally used for focusing differences between this or that recording tend to fall redundant. Pärt’s mature music responds most readily to luminous textures, carefully timed silences and mastery of line, and only rarely to the more subjective impulses of dramatic conducting. Which isn’t to say that there aren’t significant differences between various recordings of his works.

One in particular struck me afresh listening to this excellent new recording of the Third Symphony. Towards the end of the second movement, Pärt scores an accelerating sequence of timpani strokes, brilliantly reported here. However, turn to Paavo Järvi’s father Neeme on his DG recording and the quickening strokes are accompanied by a quieter ostinato (also on timps), something which doesn’t happen either here or on Neeme Järvi’s earlier BIS recording.

Paavo’s performance of the first movement suggests urgent parallels with the fraught confrontations in Nielsen’s Fifth (also the first movement). And, as David Nice rightly remarks in an unusually perceptive booklet note, there is more than a hint of ‘the spring water purity of Sibelius’s Sixth Symphony’ in the finale. Everywhere one senses the hovering spectre of early music (‘Perotinitis’, as I heard myself say) but this Third Symphony is the ideal stepping stone for first-timers who wish to journey from standard symphonic fare to Pärt’s cloistered tintinnabulation.

Another major contrast emerges between Paavo Järvi’s broad and dynamic account of Trisagion and the lighter, more incisive and significantly swifter Lithuanian Chamber Orchestra version (11’53’’ as compared with järvi’s 14’51’’). Järvi’s performance is less finely traced than that of Saulius Sondeckis but the dramatic denouement carries greater weight.
The more familiar tintinnabulation pieces work very well, with Järvi opting in the Cantus and Festina lente for warmer textures than some rivals, which usefully underlines Pärt’s quietly cascading harmonies. There are those (including me) who will still prefer a more chaste sonority, the sort favoured on virtually all the ECM productions. But my guess is that Paavo Järvi’s more central approach will appeal to those who until now have heard in Pärt’s music ascetic denial rather that quiet affirmation. Virgin’s sound canvas is well judged, especially at the lower end of the spectrum. Recommended.”

“As throughout this disc, the playing of the Estonian National Symphony Orchestra is expressive but controlled, with beautiful string tone.”
Performance: ****
Sound: ***