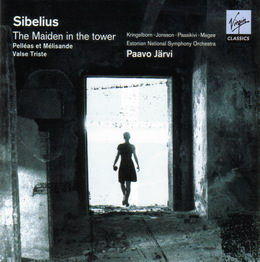 Though Sibelius had connections with the theatre all his life, writing such colourful incidental music as the nine atmospheric pieces for Maeterlinck’s Pelléas et Mélisande, he completed only one opera, and that only 35 minutes long. The Maiden in the Tower is a lightweight work compared to his symphonies, not helped by its sloppy story. Yet from the very start of the Overture, through the eight miniature scenes, Sibelius’s signature is on every bar, rising to a superb climax in the love duet. Paavo Jarvi inspires his Estonian-Finnish forces to a magnetic performance, with Solveig Kringelborn fresh-toned in the title role; Garry Magee as the Bailiff and Lars-Erik Jonsson as the Lover are cleanly focused, too.

Fans of Arvo Part’s gorgeous brand of minimalism–all soft, neo-medieval and tintinablular–will be enormously surprised by this program. The six pieces were composed before his re-examination and re-emergence in 1976, after a five-year period of silence. They are what one thinks of when one thinks of a certain variety of fascinating, if noisy and vaguely unpleasant “modern” music, the type of work one expects to hear led by Pierre Boulez. In other words, we are dealing here with atonality, experimentalism, and serialism. There are huge sonic clusters designed to upset, and statements about music are made by the music itself. The opening piece, Pro & Contra, essentially a concerto for cello, begins with a lovely D major chord which is immediately followed by a huge crash of dissonance; it is shocking and it ismeant to be. The Second Symphony features the sounds of kid’s squeaky toys. The brief piece from Part’s student period, “Meie aed,” is for girl’s choir and is entirely gentle and tonal–a grand piece of Soviet goodness. “Perpetuum Mobile” is a seven-minute crescendo which can knock you off your seat. The playing and singing, under Paavo Jarvi, are spectacular. In brief, this is not the Part you’ve come to know and love, but it’s fascinating to hear what he was like before he became who he was.

Sibelius completed his only opera, The Maiden in the Tower, during the autumn of 1896. Not that it was his first operatic effort: two years previously, he had been hard at work on a project entitled The Building of the Boat, but, after visits to Bayreuth and Munich (where he heard Tristan), he abandoned his own stage-work. Despite a feeble libretto and some decidedly wan inspiration during its 36-minute span, The Maiden in the Tower proved a great success at its Helsinki premiere and contains fascinating pre-echoes by the powerful sense of line and demandingly wide range of the vocal writing for the heroine during the first two scenes. Scene 3 boasts choral writing of real charm and open-air freshness, and much of the Lover’s music in scene 4 and the ensuing, et times oddly Puccini-style, duet is memorable by any standards. The orchestral interlude which links the first two scenes also casts a potent spell.
Paavo Järvi’s new account compares favourably with his father Neeme’s world premiere recording on BIS. Like her predecessor Mari-Anne Häggander, Solveig Kringelborn copes valiantly with Sibelius’s occasionally stratospheric demands, and if Garry Magee is not quite as eloquent as was Jorma Hynninen, there’s otherwise little to choose between the two performances. Paavo Järvi’s assembled Estonian forces seem to enjoy the whole experience, and the recording is extremely vivid without being exceptional (BIS’s earlier, more truthfully balanced production benefits from the glorious acoustic of Gothenburg Concert Hall).

As for couplings, Neeme Järvi presides over a stately, slightly sluggish Karelia Suite, whereas Järvi fils offers rather more generous measure in the shape of a beguiling, strongly characterised Valse triste and the concert suite from Pelléas and Mélisande. In the latter, the sparks don’t fly quite as abundantly as they do under Ollila, but Järvi gives a similarly refreshing, unsentimental interpretation, and his useful Tallinn band responds in shapely, committed fashion. In both ‘Mélisande’ and ‘Pastorale’ some will rightly crave just a touch more in the way of fragrant poetry; the ‘Death of Mélisande’, too, lacks the necessary wistful pathos. Elsewhere, Järvi’s eagle-eyed, often broodingly atmospheric conception serves up plenty of food for thought.

To the best of my knowledge, Decca has never reissued Horst Stein’s sensitive rendering of the Pélleas Suite with the Suisse Romande Orchestra (coupled with the Prelude and First Suite from The Tempest on a stunningly engineered LP, 8/79 – nla), while Beecham’s incomparable 1955 RPO account is currently languishing in EMI’s vaults (7/62 – nla; a reissue soon, please!). Nor would I want to be without Vänskä’s absorbing realisation of the complete original score (BIS, 6/99). In the meantime, despite any minor reservations, a warm welcome to this enterprising release.

This short one-act opera may not be top-drawer Sibelius, but no previous encounters with the work – in live performance and on disk – had prepared me for the appreciable impact it makes here. The story remains problematic, and Sibelius grew to realise that in his only complete opera he had wasted some good music on a conventional tale.

Based on a popular Swedish ballad, the opera tells of an innocent maiden, accosted and imprisoned in a castle tower by the bailiff, disowned by her father in the belief that she has ‘lost her honour for gold’, but saved by her lover and the timely arrival of the chatelaine. From the opening bars, the music is unmistakably Sibelius in his lighter vein, and the beguilingly balletic overture recalls the Karelia Suite. Solveig Kringelborn sings glowingly in the title role, and is haunting in her prayer. Garry Magee performs strongly as the baddie, and Lars-Erik Jonsson is sincere as her rescuer. Paavo Järvi makes a more compelling case for the score than his father Neeme managed on his world premiere recording of nearly 20 years ago.

Pelléas et Mélisande reminds us that the list of composers attracted to Maeterlinck’s play does not end with Debussy, Schoenberg or Fauré. Sibelius’s incidental music, along with another piece with origins in the theatre, Valse triste, receives an eloquent performance from these Estonian forces.