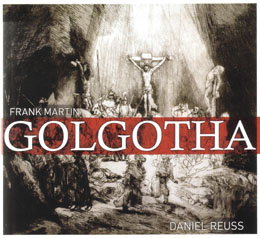 Martin’s oratorio Golgotha has been well represented on CD recently despite its being a rarity in concert programmes. This splendid new studio recording (made in Tallinn in April 2009) will win many new devotees to one of the most important choral works of the 20th century.

The inspiration for this sturdy music drama was Rembrandt’s 1653 etching The Three Crosses. Golgotha was composed between 1945 and 1948 after Martin’s 1944 oratorio In terra pax. It is arranged in 10 musical tableaux lasting an hour and a half. Martin uses text from the Gospels to relate the Biblical narrative, while interweaving selections from the Meditations of St Augustine to help reveal the mystery of the Resurrection and to guide the listener’s spiritual path. Martin’s idiom is overtly post-Romantic and frequently cinematic in its treatment of the Calvary story. The spirit of Bach hovers benignly over the polyphony; Poulenc, too, springs to mind and Martin’s word-setting owes much to the lyrical legacy of Debussy, particularly Pélleas et Mélisande. Martin’s harmonic language is easily assimilated and his orchestration is opaque and luminous.

The quintet of soloists sounds at ease with the demanding roles. Jesus’s words are sung with warmth and sensitivity by baritone Mattijs van de Woerd. The bass Konstantin Wolff is on top form. Adrian Thompson’s more passionate tenor outbursts can become rather wide of bleat but his French is admirable. Marianne Beate Kielland’s intonation suffers at the top of her range and her diction could have been clearer; but these are minor caveats.

The two choirs make light work of Martin’s demanding part-writing. Given his long post-war domicile in Holland it is fitting that a Dutch choir should be involved in this recording. The orchestral contribution is polished and nuanced. The organ part is given its rightful prominence and the piano adds punch and a period charm, especially in the secco recitatives. Daniel Reuss maintains a tight grip on the unfolding drama. His isn’t the quickest performance on record but there is such an obvious intensity and love of this extraordinary piece that it never feels as though it is dragging.

Harmonia Mundi’s documentation is excellent, with the libretto printed in French, English and German, and the engineering is top-class. A revelatory recording.