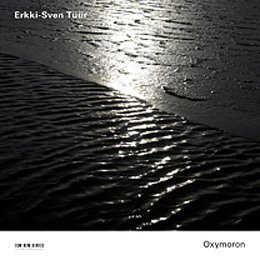 Ardor
Concerto for marimba and orchestra (2001/02)

Dedication
for violoncello and piano (1990)

“Oxymoron” – contradictory terms in conjunction – seems to be a perfectly appropriate metaphor for a music which continues to be characterised by juxtapositions of seemingly heterogeneous musical idioms, by sudden contrasts and simultaneous movements in different speeds and which thus opens wide and adventurous spaces that are conceived with a rare sense of architecture and musical dramaturgy. As Hans-Klaus Jungheinrich points out in his liner notes, “each musical quality gives rise intrinsically to its opposite…dramatic vitality thus derives from rigour itself.”

Tüür’s fourth ECM-album, consisting entirely of premier recordings of recent works, offers the opportunity to follow the stylistic development the Estonian has taken since the early nineties. His intense work with the performers who have championed his work for many years results in particularly fine and careful interpretations. “Dedication” is the earliest piece recorded here. “It was started in 1990 as a three-movement cello sonata, but working on it I realised that it was complete the way it was”, says Tüür. “I consider it one of my best chamber pieces from that period although it was never recorded then. I dedicated it to the memory of Kuldar Sink who was one of the most influential figures of the Estonian avant-garde in the sixties.” “Dedication”, like “Salve Regina” the newest piece on this album, acts as a calm and relaxed counterbalance against the two larger and more dramatic works.

“Ardor”, the expansive concerto for marimba and orchestra which was written in response to a request from the soloist of the present recording and the joint commission from the Gulbenkian foundation and the BBC, according to Tüür’s composer’s note “presents my pursuit of a harmonically richer language and is a transitional work towards my present style.” This new compositional method which appears fully-fledged in “Oxymoron” (2003) is marked by the search for harmonic unity by means of a “certain numeric code which acts genetically to form the whole composition including all its mutations and transformations.” Tüür speaks of “vectorial writing” as the voice-leading “in the wider sense follows projections of vectors in different directions.” “Salve Regina” which opens the album is another quite different example of this new method which has become compulsory for Tüür in recent years.

There is little room for coincidence in this conscientious and very precise compositional work, yet he himself, while listening to the first edit of the present recording, was startled to find out that all four pieces he had chosen – pieces of very different sonic character – are revolving around the same axis pitch “C”. The dominance of this pitch is not only evident from looking at the scores it is very clearly audible especially in the beginning of the four pieces recorded here. “It’s interesting to watch how my musical thinking has changed since 1990 when I wrote ‘Dedication’ for cello and piano although this thinking is still drawing on very similar inspirations”, says Tüür.

While rigour is never employed in a dogmatic or neo-serialist way the new technique has triggered a new flight of productiveness: Tüür is currently working on his sixth symphony and on commissions from the Australian chamber orchestra, the Münchener Kammerorchester and the Hilliard Ensemble. “The instrument I can express myself best on is the orchestra”, says Tüür, who sees the further development of large scores as his main task in the years to come.

Erkki-Sven Tüür, born in 1959 on the Estonian island of Hiiumaa, studied percussion and flute at the Estonian Academy of Music. His main teachers in composition were Jaan Rääts and Lepo Sumera. In 1979 he founded a progressive rock group that soon became highly popular in Estonia. International success as a composer in 1989 led to numerous commissions from renowned soloists, ensembles and orchestras in Europe and America, including the opera “Wallenberg” which was premiered in Dortmund in 2001. Thomas Larcher gave the first performance of Tüür’s piano concerto in November 2006 with the Sinfonieorchester des Hessischen Rundfunks under the baton of Paavo Järvi. Tüür will be presented with a composer’s portrait at “Auftakt”, the season’s opening at Alte Oper Frankfurt, in September 2007. Paavo Järvi will conduct Symphony No. 4, “Oxymoron” will be played be Ensemble Modern, further performers include violinist Carolin Widmann, Junge Deutsche Philharmonie and the Frankfurt Museumsorchester.
“Oxymoron” is the fourth album dedicated exclusively to Tüür’s works following “Crystallisatio” (ECM 1590), “Flux” (ECM 1673) and “Exodus” (ECM 1830). Tüür lives on Hiiumaa and in Tallinn.

Olari Elts who was born in Tallinn in 1971 won the International Sibelius Competition for conductors in 2000 and was appointed principal conductor of the Lithuanian National Orchestra in the following year. He regularly conducts major orchestras in Germany, England, Australia and New Zealand and is the founder and Artistic Director of Nyyd Ensemble.

Nyyd Ensemble played its first performance at the Tallinn contemporary music festival of the same name (“nyyd is the Estonian word for “new”) in 1993. The large chamber ensemble champions music by Estonian composers and plays a repertoire ranging from Debussy and Schoenberg to Tan Dun and Heiner Goebbels.

Multiple prize-winning Portuguese percussionist Pedro Carneiro, born in 1975, is one of the foremost soloists in his genre and a regular guest with major international orchestras and chamber music groups. Apart from his premiers of numerous pieces written especially for him Carneiro has strong interests in jazz and improvisation collaborating with musicians such as Michael Mantler.