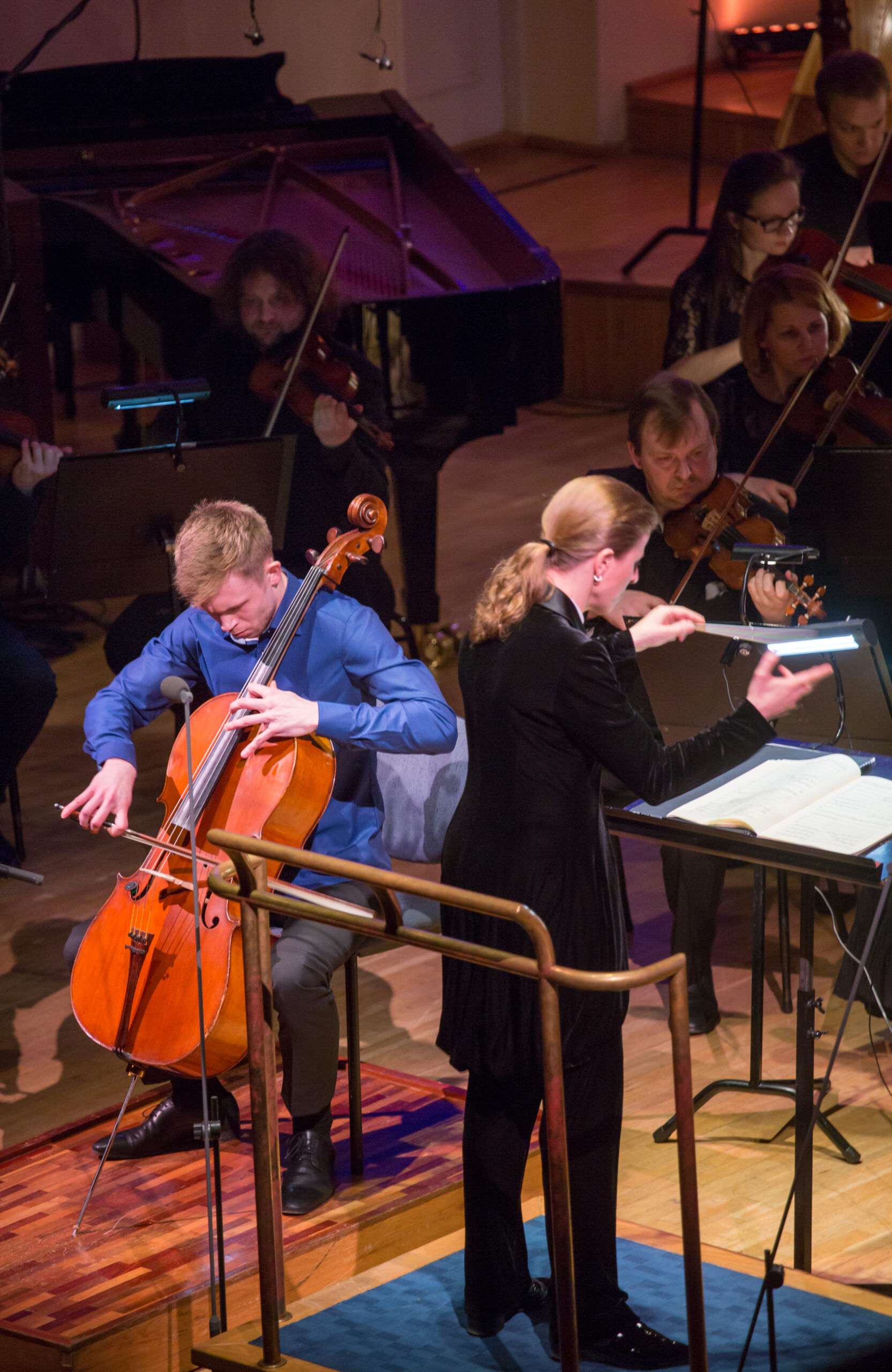 Saturday 7 April 2017 saw two events at Tallinn’s concert hall and opera house complex, as part of this year’s Estonian Music Days. First the Estonian National Symphony Orchestra gave a concert, conducted by Kristiina Poska gave the premieres of Liisa Hirsch‘s Threshold, Tauno Aints In Memoriam Veljo Tormi and, with pianist Johan Randvere, Timo Steiner‘s And then leave everything you’ve got and go’, plus Erkki-Sven Tüür‘s Cello Concerto, with cellist Theodor Sink, and Lepo Sumera’s Symphony No. 4 ‘Serena Borealis’. Then after the main concert, up on the roof composer Peeter Vähi (keyboards) and Hele-Riin Uib (percussion) performed Vähi’s An April Night’s Dream.
In fact it was very much a multi-part evening. At 6pm the Estonian National Symphony Orchestra & Kristiina Poska had performed A Young Person’s Guide to  New Music by Brian Current (born 1972) for symphony orchestra, narrator and electronic sound files, with narrator Ardo Ran Varres. Then as we arrived for the main concert, the hall’s lights were dimmed (reflecting the festival’s theme, Through the dimness) and playing around us was Ekke Västrick’s sound installation Contact with Concert Hall created by using contact microphones on the concert hall building.

Before the main concert started, there was the presentation of the LHV award for new compositions “Au-tasu”, presented to the composer whose new musical work, premiered in 2016, garnered unanimous acclaim from the jury. This year the chair of the Estonian Composers’ Union, Märt-Matis Lill, presented the award to Toivo Tulev (born 1958) for Black Mirror.

Threshold by Liisa Hirsch (born 1984) started out with just a bass line and barely-there chords from the strings. The composer’s programme note talked about the use of quarter tones and a special playing technique which muffled the string tone and altered pitch, but we were not aware so much of the exact mechanics as the rather eerie effect created. It was texture rather than harmony at first, though notes emerged and there was a slow build-up of overlapping chords which after rising to a climax, descended to nothing again.

Tauno Aints (born in 1975) on his Produced In Memoriam Veljo Tormis as a tribute to the personality, oeuvre and message of the great Estonian composer who died in January this year. The piece started with just a wandering melody on the violas, surrounded by sustained harmonies, gradually other instruments took up the melody but it remained in the middle of the sustained texture. As the tempo picked up, the faster moving textures preserved the idea of the main melody surrounded by accompaniment, as series of fast flowing textures developed into series of different metres played simultaneously by different groups of the orchestra. There was quite a Romantic modal feel to the piece, and I would have been intrigued to know whether any of the material that we were hearing related to Tormis’ own work.

The first half concluded with the Cello Concerto by Erkki-Sven Tüür (born 1959), written originally for David Geringas in 1996, The soloist at the concert was the young Estonian cellist Teodor Sink who, rather impressively, played the taxing cello part from memory. The work is in three distinct parts, and Tüür said in his programme note that he was aiming to create something different that an traditional concerto. The solo cello part, though taxing, is not virtuosic in the grand manner nor is any sort of dialogue or battle created. Instead there was very much the feel of a concertante work, the spirit of the concerto grosso with Theodor Sink being primus inter pares. This worked well as a concept, but there were moments when we could see Sink performing elaborate fingerwork, but could not really hear the detail, which was a shame. The first section had Sink’s cello repeatedly emerging from orchestral chords, and even when the music got busier there was a sense of the soloist trying to differentiate himself from the orchestra. In fact, Tüür  in his programme note talked of the concerto being the journey of an individual. In the vigorous middle section, the cello was sometimes with the orchestra and sometimes against, and we could appreciate some striking Tippett-esque poly-rhythmic passages. In the slower final section textures repeatedly built up from nothing, there were moments of violence and moments of magical transparent scoring with each growing out of the other. The ending seemed to return us to the opening, yet transformed and it faded away to nothing followed by a long silence.

Theodor Sink gave a terrific performance, making the solo cello part a very personal journey and he was strongly supported by Kristiina Poska and the Estonian National Symphony Orchestra.

For the second half, Poska and the orchestra were joined by the young pianist Johan Randvere for the premiere of And then leave everthing you’ve got and go…’ by Timo Steiner (born 1976). In his programme note Steiner warned that the piece reflected his latest efforts toward silence, sparseness and inner resounding. The piece opened with a long (very long) piano solo in which Randvere (playing from an iPad rather than printed music) played at the very fringes of audibility, sometimes tapping the piano lid and sometimes blowing into the body to activate the strings. To have the full symphony orchestra sitting there silent for such a long time seemed perhaps daring or perhaps arrogant, or there again perhaps designed to annoy the traditionalists (it certainly annoyed a lady near us). When the orchestra joined, after a long silence from the piano, the music was again at the fringes of audibility yet gradually building, including muttering from the players towards a climax which evaporated into just the piano and the orchestra blowing into/onto their instruments.

Finally a more traditional work, albeit one written in 1992, the Symphony No 4. ‘Serena borealis’ by the great Estonian symphonist Lepo Sumera (1950-2000). After last year’s concert at the Estonian Music Days (see my review) I vowed to get to know Sumera’s work better, and this performance of his fourth symphony made me even more so. It is a concentrated work, in four (or five) movements which was commissioned by the state of Baden-Württemberg, Germany, on the occasion of the Days of Estonian Culture in Karlsruhe in 1992.

The first movement, Allegro ma on affetuoso was full on energy, vibrant with excitement and movement, and rather filmic in its dramatic textures. Kristiina Poska kept the level of energy high, even in the quieter moments. A thrilling start to the movement, followed by the quieter Lontano e sonore where the texture started from the low basses in the strings and gradually built vertically, all the time over a constant ticking figure in the percussion. The third movement (or second part of the second movement) repeated this material, starting from low wind and gradually building again. All the time the ticking continued, but careful listening showed the the rhythmic figure was constantly but subtly changing. A cadenza for electric guitar and percussion proved remarkably discreet, and led to the next -movement, marked Fierce where timpani issued in music of energy and violence, crashing climaxes being followed by silence. The final movement, Dolce e pianissimo started with quiet, intense yet sweet strings, with solo strings over sustained tutti to create a magical conclusion.

This was a terrific concert which enabled us to sample a wide variety of Estonian classical music, with younger composers performed alongside their older peers to bring out the rich depth and variety. Throughout Kristiina Poska and the Estonian National Symphony Orchestra, on a very crowded stage, gave a strong performance.

Afterwards, in a sort of hybrid between art installation and rock concert, Peeter Vähi (keyboards) and Hele-Riin Uib (percussion) performed Vähi’s An April Night’s Dream outside on the roof. Complete with dramatic lighting (despite the rain), it looked like a rock concert, yet Vähi’s keyboards played sounds of the city as well from the dull roar of traffic to hare krishna, along with more populist music presented in Ivesian cacophony. The title refers no so much to Shakespeare as to political events which happened in April, and we could take Vähi’s more popular moments to be ironic comments on totalitarian regimes and their views of classical music.

Update: I understand, from talking to Peeter Vähi afterwards, that the rain started to affect his synthesizer from around half way through the piece.