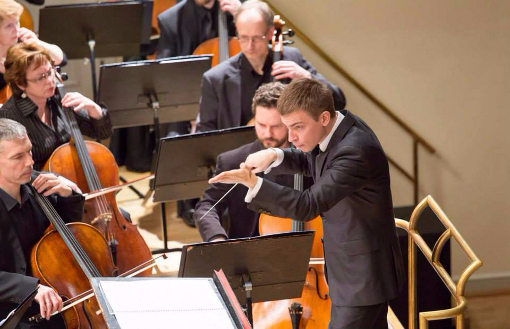 The Estonian National Symphony Orchestra Easter concert represents new music patronage on a grand scale. Six up-and-coming Estonian composers are commissioned write a substantial work for orchestra, and an entire concert is given over to their first performances. The event is part of the Estonian Music Days festival, an annual two-week celebration of the country’s compositional talent. The programme in 2015 is as vibrant and diverse as ever, and a testament to the artistic benefits of state support on this scale.

There are risks though. Programming this concert was evidently problematic, and finding the necessary balance and contrast difficult. But a novel approach was found, with the three most substantial works in the first half and three concertante works in the second. More continuity than contrast, but there was sufficient variety between the approaches of each composer to make this effective.

The concert opened with an empty stage. First, by Jakob Juhkam, is a sound collage, assembled from extracts of first symphonies by various (and unnamed) Estonian composers. Knowing the original works may have been a benefit, but the piece was attractive on its own terms, especially for the inventive but discreet use of the surround sound audio.

When the orchestra did appear, their first piece set a high standard, Lighting the Fire by Tatiana Kozlova-Johannes. The piece plays out as a single arc, gradually rising in intensity and then subsiding. Yet the orchestral textures are always evolving from within. As with much of the music that followed, the large percussion section formed a focal point for the work. Composers here seem to have a taste for the rainstick, which featured in at least three of the works. But Kozlova-Johannes integrates this and every percussion sound skilfully into the orchestral textures. The one exception, surely deliberate, was the combined sound of three of four rolling cymbals at the climax, which completely obliterated the rest of the orchestra. A brave idea, but one judged to perfection.

Phrygian Landscapes is the first orchestral work by Meelis Vind, who, as well as being a keen jazz musician, is the orchestra’s long-serving bass clarinettist. The piece brings together a range of musics linked to the Phrygian mode, from Indian and Gypsy music right up to jazz. The various styles are well integrated into a modern orchestral style that regularly veers into ethnic or jazzy sounds, but without losing its specific identity. It sometimes lost focus though, and was the one piece of the evening that could have benefited from cuts. Vind attempts to keep the momentum high, but over what turns out to be an impossibly long duration.

The three concertante works of the second half began with Lost Space for organ and orchestra by Kristo Matson. In fact, the organ rarely dominated the music, instead providing focal colours for the orchestra to elaborate, often warm diapason textures supported by round string sonorities. The ending of this work was interesting. When the orchestra and organ stopped, they were replaced by a tape track, a few minutes of what sounded like electronically synthesised jungle sounds. It was difficult to tell if this, rather than the organ part, had been the source of the preceding music, or rather an elaboration of it, but it provided a logical, if surprising, conclusion.

Riho Esko Maimets was born and raised in Canada, but now resides in his ancestral home of Estonia, where he is one of the rising stars of the country’s new music scene. His Accordion Concerto, for soloist Henri Zibo, is a varied and entertaining affair. It opens with slowly rising scales passed between the soloist and the strings, the very long individual notes here demonstrating Zibo’s impressive tonal control. The music then moves into more conventional territory, a series of dances, lively and rhythmically astute, and surprisingly tonal in the context of this programme.

The concert ended with silent songs by Tõnu Kõrvits, for which Meelis Vind returned, this time in the capacity of bass clarinet soloist. As in Vind’s own work, this piece combined classical and jazz idioms, but in an even more integrated way. The bass clarinet was often called on to imitate saxophone sounds, with the string textures skilfully rendered to complement his aspirated tone. This was another fairly conventional work, at least harmonically, but a satisfying conclusion to the concert.

Nothing short of competent in this selection of new works, but the Tatiana Kozlova-Johannes and the Kristo Matson works stood out as the ones most likely to receive further hearings. There were some impressive performances too, the orchestra taking what must have been a hugely demanding programme for them very much in their stride. The conductor, Taavi Kull, looked impossibly young, but led these performances with clarity and conviction. An impressive performance all round, and a fascinating snapshot of what is clearly a large and vibrant new music scene in this diminutive Baltic state.

This concert can be heard via http://klassikaraadio.err.ee/v/kontserdisaal/saated/5bbb5c54-a1e2-430c-a66e-524d500a4fe8 available for up to 30 days from the date of broadcast.