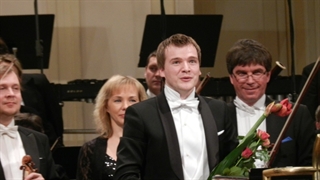 The symphonic music-scape is studded with stars; the well-loved and well-known toe-tappers of the familiar that comprise the orchestral canon. So it is always special, and yes novel, when the novel is unveiled. ERSO was especially generous on Friday by providing an evening almost entirely comprised of premiere performances.

The program was a celebration of Estonian Music Days and featured five compositions, four of them never before performed and four of the five by Estonian composers. Trying to wrap one’s head around music heard for the first time is always a challenge, but exciting. This was musical experiment for composer, performers and listeners alike.

Some of this experimentation attended even to the physical form of the orchestra itself. Longtime avant-garde composer, the Franco-American Gerard Pape, had the orchestra split in three for the premiere of his work “Harmonies of Form and Time”. Conductor Risto Joost waved his baton from the middle of the concert hall as the band assembled here and there. It was an interesting effect. Pape’s music was an intense barrage which featured solo performances for multiple instruments. Noteworthy was the plaintive wail of Levi-Daniel Magila’s cello which opened the piece, and Vambola Krigul’s dynamic percussion. Pape’s piece was a threshold experience, opening a musical space that landed in an intense crescendo. Joost seemed to really be enjoying himself.

But prior to this there was heaps of other stuff. The other Krigul, Ülo’s “Swan Bone City”, brought solo vocal performance in the person of the elfish Iiris Vesik. Vesik, best known as a pop performer, lent a mesmerizing and pretty weird quality to this work. Equal parts oracle and acid queen, she went on at length in English about something I wasn’t quite able to understand. It was theatrical, frenetic and captivating.

Before intermission flamboyant Estonian celebrity Rein Rannap played his succinctly titled “Piano Concerto”. This was a fairly prosaic bit of emotional piano music, or was it? Redolent of a film score, the “Piano Concerto” held more than a few pleasing musical clichés but also subtle pastiche. Much of it came off as homage to 1960’s or 70’s TV or cinema music, especially the English variety. I half expected to see David Niven stride across the stage at some point. All in all it was good fun and masterful piano work as only Rannap can provide.

Starting the program was Peedu Kass’s “7 Fragments”, a short symphony. It had the feel of compelling ambient music. Kass’s work was just the thing to loosen the mind and relax the body to absorb the mind-stretching material that followed.

Finishing was the only piece that wasn’t new, Jaan Rääts’s Symphony No 7. Rääts’s superb symphony was a reminder that this was Estonian Music Days and of the sterling contribution to orchestral music made by this small nation. And it was very cool that Mr. Rääts, the elder statesman, was in attendance, as were all the other composers featured for the evening.