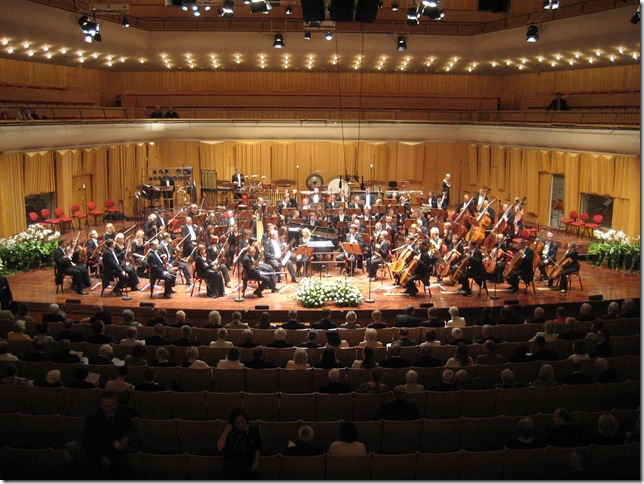 Estonia was one of the three Baltic states suppressed by Soviet Russia in 1940. Thursday night at the Kravis Center, this tiny state of 1.5 million people sent a credible symphony orchestra of 76 players to perform music by Tormis, Dvořák and Brahms in the Regional Arts Concert Series.

Independent since 1991, Estonia is closer to Finland geographically than Latvia and Lithuania, the other Baltic states, and their language is in the same linguistic family with the Finns. Why the programmers for the Estonian National Symphony Orchestra chose Brahms’ Second Symphony over works by Sibelius, Nielsen or Grieg, composers of Scandinavia, is puzzling, since the Brahms was not well-received. Perhaps they wanted to emphasize the Brahms-Dvořák friendship, a thin thread on which to hang a concert program that had its many ups and downs.

Luckily, the opening composition by the 83-year-old Veljo Tormis, called Overture No. 2 (1959), was highly representative of the northern character of these resilient Estonians. It began with very fast violin playing, joined by equally fast cellos as they built up to a strong orchestral sound reminiscent of the late William Walton’s music, particularly in occasional dissonant sounds from the brass section.

Then strings and brass answer each other many times with long singular chords until peace descends with an elegiac melody from the horns and winds. A four-note trumpet sound signals rapturous string playing overlaid by a melodic flute solo. A lone viola breaks the mood and the bassoons lurch in with bubbling comments. Horns introduce yearning strings as rolling timpani accompanies some fast string playing. Hearty brass and a solo trumpet join the fray.

Descending orchestral chords drawn from the first and second violins are interrupted by the rat-a tat-tat of trumpets, brass and timpani, ending the overture on a fine musical full stop. Exciting stuff from Tormis, whose works were banned by the Soviets at one time but were brilliantly played by this fine orchestra.

Dvořák’s Cello Concerto (in B minor, Op. 104), followed, with 25-year-old Armenian cellist Narek Hakhnazaryan as soloist. Winner of the 2011 Tchaikovsky Competition Gold Medal and the prestigious Young Concert Artists International Auditions in 2008, he strode on stage clad in dark pants, a white dress shirt worn outside the trousers and bright patent leather shoes.

After 10 minutes of playing, Hakhnazaryan took a handkerchief from under his right thigh, wiped his sweating brow and then proceeded to apply the wet kerchief to the strings of his cello. I’ve heard the greats ranging from Casals to Du Pré to Leonard Rose and Yo-Yo Ma, and none of them were overcome with this affectation. Put it down to traveling on the road where one has little time for exercise or calisthenics. However brilliant his playing, the three “wipe downs” were distracting.

Overall, young Hakhnazaryan tended to rush his performance, often getting ahead of the fine orchestral accompaniment. His playing in the lower register was beautifully expressive in the second movement. And the cadenza-style solo with flute and cello obbligato backed by viola, trumpet and bassoon, was wistfully delightful. Cellist Leo Stern, first to play this work, was surprised when told by Dvořák he hadn’t included a traditional cadenza, where the soloist shows off his technique.

The third and last movement begins march-like, with tough scales for the cello masterfully played, though at times I felt Hakhnazaryan’s bowing had too light a touch against the strong orchestral sound.

The Symphony No. 2 (in D, Op. 73) of Brahms, however, was a disappointment. Conductor Nikolai Alexeev began well, but the deterioration was so obvious by the end that this very savvy audience of 1,500 concertgoers gave the players a lackluster reception, unlike the rapturous reception for soloist, orchestra and conductor in the Dvořák, before intermission.

The first movement opened well, with occasional fluffs from the solo horn, and there were rough patches as well from the rest of the brass section, though they improved toward the end. In the second movement (Adagio non troppo), Alexeev took it too majestically, so that the upward sweep of the violins had hardly any impact. Also, individual solo statements were refined and not declarative enough because of the slow tempo.

The Allegro moderato third movement started off well enough with its tripping melody, but when double times, Brahms’ favored counterpoint rhythms were ineffective; the whole back and forth was labored. The Finale also began robustly, with good work from the woodwinds, but Alexeev stood like an automaton for the rest of it, simply counting time, and bringing off the symphony as an exercise in ordinary music rather than the masterpiece it is.

Too many concerts with too little rest between can try the finest of ensembles, of which this is obviously in the top rank. They give 30 concerts a year in their own Estonia Concert Hall in Tallinn, their capital city and have made over 500 tours in Europe, Siberia, Russia and these United States since they were formed in 1926. The Sibelius Second would have been a better selection.

For those interested, the solo cello encore before the intermission was the contemporary Italian composer Giovanni Sollima’s Lamentatio; the string orchestra at the end of the concert was Kodumaine Vis (Homeland Melody), by the 20th-century Estonian composer Heino Eller.