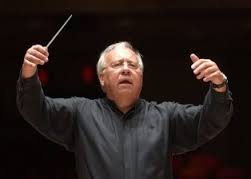 While it may be dangerous or overly sentimental to resort to superlatives, the appearance Saturday, November 2 at Bing Concert Hall, Stanford University, by the Estonian National Symphony Orchestra under Neeme Järvi, proved that a musical colossus remains thoroughly capable of producing the most intimate effects, especially when every movement, every physical tic and gesture of the master conductor can be read and translated into gorgeous sound.

By the time Järvi, concluded his second Sibelius encore, the ardent lament Andante Festivo (1922; rev. 1938), scored for strings and tympani, the Bing audience no longer knew whether to clap, cheer, or sit still in awed silence. The wild acclimation following the Sibelius Fifth Symphony had already incited the first orchestral encore, the popular Valse Triste, in which Järvi, barely had to move to elicit the most glorious nuances and graduated textures from his strings. The opening piece, too, featured the brilliantly homogenous playing of the Estonian string choir, Arvo Pärt’s Cantus in memoriam Benjamin Britten (1977), a lovely (and relatively brief) elegy for strings and bell that shifts and modulates in extremely small intervals, meant as a tribute to Benjamin Britten, in whose music Pärt found “unusual purity.” This funeral cortège might have nodded to the Liszt R.W.—Venezia, that composer’s homage to the late Richard Wagner. Each of the successive selections seemed to resonate with yet another section – or blends of orchestral choirs – of Järvi’s, finely honed ensemble.

The featured soloist for the plum of the first half, Dvorak’s enduring Cello Concerto in B Minor, Op. 104 (1895), Narek Hakhnazaryan, the 2011 recipient of the Gold Medal at the XIV International Tchaikovsky Competition made an immediate sensation. Setting a tempo that did not dawdle but also broadened with Dvorak’s welter of melodies, Järvi, elicited splendid fanfares from his winds and horns, then set a pedal tone for Hakhnazaryan’s warm entry. A long love-affair proceeded, with the soloist often playing directly in rapt dialogue to Järvi’s, open embrace, while a voluptuous Allegro emerged, swelled, and then at the major key change in the development, cleared out to allow the solo a most heartfelt expression of anguish – the piece is a kind of requiem for Dvorak’s great love, Josefina, Countess Counic – whose only consolation came from the principal flute of the orchestra. The second movement Adagio confirmed the youthful Hakhnazaryan’s cello tone as a source of sweet cream, intoning Dvorak’s own song Lasst mich allein (Leave Me Alone), Op. 82, No. 1 as the main source of melodic melancholy. This elegiac song returned in the Finale, combined with Dvorak’s uncanny ability to create a synoptic overview, a kind of musical equivalent of “And so, my children. . .” that lends an atmosphere of Paradise Lost to a remarkable panoply of enchanted melodies.

But before anyone had stopped his applause, soloist Hakhnazaryan performed an encore, a frantic, often guttural rendition of Lamentatio (1998) by Italian composer-cellist Giovanni Sollima (b. 1962). Chanting in his own voice while playing the most alternately strident and anguished of riffs, Hakhnazaryan sounded like a Celtic priest or Armenian bard, invoking a series of restless spirits who expressed themselves through glissandi, arco and pizzicato bowings, ponticello and harmonics, and any number of contorted effects, the whole absolutely mesmerizing. Even the orchestra musicians seemed to have stopped breathing while the young virtuoso made an impression of artistic subtlety not to be forgotten.

With the Sibelius Fifth Symphony (1914-1919) Neeme Järvi, cemented his own credentials upon a convinced audience. Conceived as a huge, stratified arch, the E-flat Symphony grew organically from an opening horn motif, ushering in the Estonian’s resplendent brass section. After any number of metric permutations and graded dynamics, the first movement sped up frenetically, only to come to a dead halt on the proverbial dime. The solemn tempo of the Andante assumed a golden hue as led by the majestic Järvi,, who used the barest gestures to unleash potent utterances in pizzicato strings and staccato flutes that evolved into coloristic variations. Sibelius himself once described this music as “God’s mosaic,” and certainly Järvi’s, studied rendition of the third section’s melding into the last movement combined the rustling of “whirling wings” with a “swan song” whose final peroration opens the Kingdom of Heaven. With those final hammer blows that end the work, the Bing Hall audience rose in unanimous admiration of a master ensemble led by a Titan.