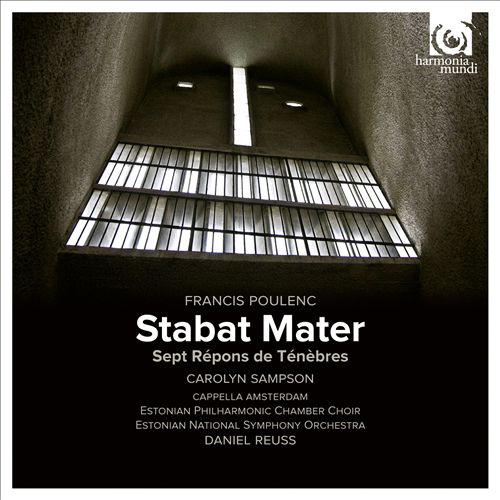 As one of the leading composers of his generation, Francis Poulenc (1899-1963) was one of the group of composers known as Les Six, that included Georges Auric (1899-1983), Arthur Honegger (1892-1955), Darius Milhaud (1892-1974), Germaine Tailleferre (1892-1983) and Louis Durey (1888-1979) among their number. Poulenc’s music is fundamentally tonal, although he made use of harmonic innovations such as pandiatonicism (a technique of using the diatonic scale without the limitations of functional tonality) and chromatically altered chords.

Poulenc was born, in Paris, into a wealthy family, his father Émile Poulenc being a director of a large pharmaceutical company. His mother was a talented amateur pianist who began giving him piano lessons at age five. Later Poulenc studied with a niece of César Franck, and then with the eminent Spanish virtuoso Ricardo Viñes.

Poulenc became well known at age eighteen when his Rapsodie Nègre for baritone and chamber ensemble made him an overnight sensation in France. After military service Poulenc’s success continued with his ballet Les Biches appearing in 1924. During the 1920’s and 1930’s he was extremely prolific but it was his return to the Roman Catholic Church in 1936 that brought many important religious works including two of the works featured on this new release, his Stabat Mater of 1950 and Sept Répons des Ténèbres of 1961.

What a fine opening Poulenc gives to the Una hora non potuistis vigilare mecum of Sept Répons des Ténèbres pour soprano, chœur et orchestre, the gently shifting orchestral sounds interspersed by violent orchestral outbursts before the choir enters, slowly and gently. These are very fine choirs indeed, responding so well to the text as the music suddenly drives forward. The balance between choir and orchestra is ideal. In Judas Mercator pessimus, Daniel Reuss and his forces find the right subtle balances in this very unecclesiastical piece that is full of energy with so much suppressed feeling in the slow last line,’ It has been better for him if he had never been born.’

Carolyn Sampson enters for the first time in Jesum tradidit impius. She has a lovely tone – just listen to her gentle high notes – pure magic. There is some fine orchestral and choral contribution and a fine brooding orchestral end. The choir are top notch in the harmonic shifts of Poulenc’s writing for Caligaverunt oculi mei with Reuss drawing out many lovely nuances. There is an exquisite coda from the orchestra.

It is a lovely moment when, in Tenebrae factae sunt, Carolyn Sampson enters against a still orchestra followed by the choir. Again the balance of soloist, choir and orchestra is very fine and, when the music builds, richly, for all forces it is tremendous, as is the moment when the music falls again to just the soprano and orchestra. There are so many fine moments in this piece. A brass chorale opens Sepulto Domino followed by a mellifluous choir with occasional subtle varying of rhythm. As the music builds, the choir gives some lovely rich, mellow textures, as well as dynamic, intense passages.

Ecce quomodo moritur justis moves along with a purposeful tread for orchestra before the choir join. Reuss is careful to find all the little subtleties and nuances that add so much. Poulenc was a master at word setting with his music responding, often violently, to the text. The coda is particularly lovely.

Next we come to Poulenc’s Stabat Mater pour soprano, chœur mixte et orchestra where, in the orchestral opening of Stabat mater dolorosa, Reuss finds just the right melancholy atmosphere before the male voices of the choir enter together with exquisitely blended woodwind. Poulenc’s use of various section of the choir is masterly and well pointed up here. Again Reuss finds so many little subtleties.

There is some really fine choral singing in Cujus animam gementum, a dynamic section, full of passion, yet Poulenc could suddenly slip into an unexpectedly mysterious and quiet end. The choir gently enters alone in the opening of O quam tristis et afflicta with a gentle blend of voices. The orchestra joins as this gentle section continues, subtly pointed up in the bass.

Quae moerebat et dolebat is one of Poulenc’s light and rather detached pieces though gloriously sung. Quis est homo, qui non fleret shakes us out of any complacency with passionate singing from the choir and fine orchestral playing from the Estonian National Symphony Orchestra, especially the fiery conclusion on the words Et flagellis subditum.

Carolyn Sampson re-joins for Vidit suum dulcem natum. How she sets her vocal line above the choir is beautifully done as is the orchestral entry that, towards the end, cuts through the melancholy tune. The mood, again, lightens and livens with Eja mater, fons amoris as the choir and orchestra flow forward, surely Poulenc’s way of expressing consolation.

Fac ut ardeat cor meum opens with the choir alone, at first ardent, then calmer with such finely controlled singing. The men’s voices open Sancta mater, istud agas before the whole choir enter on the words Crucifixi fige plagas. The orchestra drives the choir along with a terrific fervour before the sudden dramatic turn at the end. The orchestra sets out purposefully in Fac ut portem Christi mortem with Poulenc’s distinctive plod in the bass before the choir enters. Soon soprano, Carolyn Sampson, joins, gloriously rising with choir and orchestra.

The orchestra fly into Inflammatus et accensus quickly joined by the choir in perhaps the most dramatic section of this work. This makes the sudden drop in tempo and dynamics all the more telling before Reuss builds the music again leading straight into Quando corpus morietur, a quiet choral section which quickly rises in drama with some fine choral singing. Carolyn Sampson joins as the choir and orchestra head toward the final Paradisi Gloria which the choir alone take. When the soprano, choir and orchestra weave together in Poulenc’s inspired writing, Reuss realises this music beautifully. The bold final Amen heralds a decisive end with choir and orchestra.

What a distinctive composer Poulenc was. These are two glorious works that deserve to be in anyone’s collection. These two choirs really are first rate with Daniel Reuss and the Estonian National Symphony Orchestra making this a fine recommendation for these works.

They receive an excellently recorded made in the Estonia Concert Hall, Tallinn, there are excellent notes together with full texts and translations.