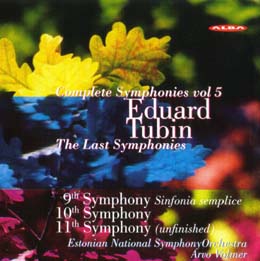 After the acerbic, frequently tormented style of Symphonies 6-8, Eduard Tubin’s last works in the form reveal him as less concerned with pain and suffering and instead preoccupied with comparatively tuneful, gracious thematic material, lucidly organized. In this he resembles Sibelius, particularly in the single-movement 10th Symphony, a work as organic in its growth and development as Sibelius’ Seventh. Tubin’s orchestration also thins out considerably in these later works, with percussion limited to timpani and the scoring more open and widely spaced among instrumental groups than previously.

Symphony No. 9, subtitled “Sinfonia semplice”, lives up to its title. The first movement reveals as shapely an example of sonata-form as Haydn or Mozart ever wrote, with clearly defined thematic groups and a pellucid development section. The second movement, beginning slowly, includes an exceptionally deft quick fugue on the way to its peaceful close. Symphony No. 11, only the first movement of which was performable after Tubin’s death, shows the composer returning to the neo-classical manner of such works as the Fourth and Fifth Symphonies, allied to his newly luminous scoring.

Neeme Järvi recorded the Ninth and Tenth symphonies for BIS very successfully. As usual, he tends to be a bit swifter than Arvo Volmer in the slow movements, but here Volmer’s slightly more measured serenity accompanied by beautiful string playing from the Estonian National Symphony Orchestra easily renders these performances the equal of Järvi’s, and some listeners may very well prefer them. In any case, the differences are slight, and the recorded sound of this release is excellent in every way: warm and ideally balanced, with superior depth and transparency. This is music well worth getting to know, and these interpretations make the process as easy and enjoyable as we have any right to expect. A lovely disc.